Vietnamese coffee is the best drink

If black coffee, known as "cà phê đen nóng" in Vietnamese, is your coffee of choice, pull up a chair and order a Vietnamese drip coffee. A metal filter is placed on top of a coffee cup. This form of coffee is more difficult to have to go as it takes a bit of time for the coffee to filter and for the coffee mug to become full. If you're in a hurry, opt for a different coffee. Vietnamese coffee is quite strong so, without anything added, black drip coffee is the strongest coffee you could order. 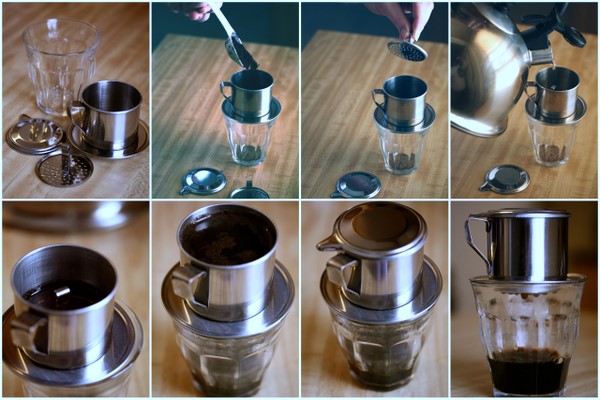 While all Vietnamese coffee is delicious no matter the cost, sometimes it’s fun to splurge and make an occasion out of it. In this case, head to Cafe Runam at 18 Nhà Thờ. Cafe Runam is a beautiful, European-inspired coffee shop. Their traditional drip coffee costs 70,000 VND (3.10 USD). After enjoying your drip coffee, walk less than a minute down the street to see St. Joseph's Cathedral. If you come on a Sunday night, the church will be overflowing during mass. Coffee with milk can be found anywhere and is generally around 20,000 VND (0.80 USD). Grab a coffee with milk at Aha Cafe on Quan Su Street before walking the two blocks to Hoa Lo Prison Museum. Otherwise referred to as the "Hanoi Hilton", the prison was used to incarcerate the Vietnamese during their struggle for independence from the French. The prison was later used to incarcerate American POWs during the Second Indochina War.

Coffee with yogurt, "cà phê sữa chua", is practically candy. The yogurt is extremely sweet and is the overwhelming taste in yogurt coffee. Order coffee with yogurt if you're more interested in yogurt than coffee but still want the energy from a Vietnamese coffee. Order a coffee with yogurt for 35,000 VND (1.55 USD) at Manzi Artspace. Manzi Artspace is not only a coffee shop, but is also an art gallery. A few art pieces hang on the walls on the first floor. However, the majority of the pieces are upstairs. From Manzi Artspace, walk 20 minutes or grab a quick taxi to Tran Quoc Pagoda. Tran Quoc is a beautiful pagoda set on West Lake.

Egg coffee, "cà phê trứng" in Vietnamese, was invented by Nguyen Giang in the 1940s when there was a major shortage of dairy in Vietnam. The ingredients have stayed the same throughout the decades and include egg yolk, Vietnamese coffee powder, sweetened condensed milk, and sugar. It may seem odd at first, as if the egg doesn't complement the coffee. However, the egg yolk is whipped with the other ingredients, not just plopped into the coffee as a separate entity! Nguyen Giang also opened his own cafe, Giang Cafe. While the cafe has relocated since its original opening, it still has the same vibe as it always has. Its decor is very minimalist, as it would have been during the communist era. It is tucked down a small lane located at 30 Nguyen Huu Huan in the Old Quarter. It is a short walk from Hoan Kiem Lake. Enjoy your egg coffee for 30,000 VND (1.33 USD) in Giang Cafe, or order it to go before going on a walk around the lake or sitting on a park bench and taking in the view.

Coffee with coconut and milk

The above-mentioned ways of drinking coffee are extremely popular in Hanoi. However, sometimes you may want to drink something different, something fun! This is when you'll want to drink the coffee with coconut and milk from Cong Caphe for 35,000 VND (1.55 USD). The coconut adds a touch more sweetness to traditional coffee with milk.

Cong Caphe is a chain of coffee shops scattered throughout Hanoi. It's a great place to socialize, bring your computer to do work, or grab a coffee to go. While it is a chain, it does not feel like one. The decor is inspired by Vietnam's Subsidy Period (between 1975 - 1986), with communist propaganda adorning the walls and a military vibe. Waiters wear military-inspired uniforms.

Go to the Cong Caphe at 32 Dien Ben Phu after you've spent the morning at Ho Chi Minh's Mausoleum. The two destinations are only a five minute walk from each other.

Weasel coffee is available to drink in the Old Quarter of Hanoi. There are multiple weasel coffee shops at the corner of Ma May and Luong Ngoc Quyen streets. Weasel coffee costs 30,000 VND per cup (1.32 USD), making it one of the more expensive types of Vietnamese coffee. It also happens to be the smallest cup of coffee served.

If you want to find your own favorite coffee shop, aside from the ones mentioned, Nguyen Huu Huan in the Old Quarter should be the first street you explore. It's known as "Coffee Street" because practically every establishment on the street is a coffee shop. You'll see just how big of a social experience drinking coffee is in Vietnam, as the entire street is filled with avid coffee-drinkers spending hours with friends.

Grabbing a weasel coffee is one of many things to do in the Old Quarter of Hanoi. You could spend an entire day, or two, exploring the narrow streets of the Old Quarter. Be sure to visit Bach Ma Temple and Dong Xuan Market, a traditional Asian market selling live seafood, clothing, electronic, suitcases, and fabric, among other things.