Located in Vinh Thach commune, Vinh Linh district, Quang Tri province and follow the Hwy 1A east for 13km and 6km north of the Cua Tung beach. The Vinh Moc Tunnels is a steel fortress helped North Vietnam army to fight against the Americans during the Vietnam War and helped the civilian population to protect themselves from the American bombing (period of 1965 – 1972).

There are over 60 tunnels in Vinh Linh Complex such as Tan My, Mu Giai, Tan Ly, … among which Vinh Moc is the largest one as well as is the most solid and firm underground miniaturized village in the DMZ of Vietnam. They survived, and even prospered in their makeshift underground community. During that time, 17 children were born in the tunnels, each of whose lives is a testament to just how perfect the complex network of caves and warrens were at protecting those forces within. As time goes by, it has become both a historical evidence and a tourist destination for discovering a heroic period of Vietnam’s history. Most of the tunnels are open to visitors, and are kept in their original form (except for electric lights, a luxury the villagers certainly didn’t have).

The tunnel soil is a dense clay, allowing easy hands digging of the tunnels. Air caused the clay to harden, making the walls extremely strong. The tunnel underground system is digged from 1965 to 1967 with nearly 2km of total length and required approximately 6,000 cubic meters of earth to be dug out. The main inner axis is 2,034m long, 1-1.2m wide, and 1.5-4.1m high. The two side cliffs are molded into small temporary houses every 3m. The tunnel center has a 150 seated hall, clinics and maternity place. The tunnels is structured into three floors and round staircase: the first 13m beneath the ground, the second 15m and the third 23m with 13 entrances in which 6 of them linked to a nearby hill and to the sea by another 7 exits, which also function as ventilators. 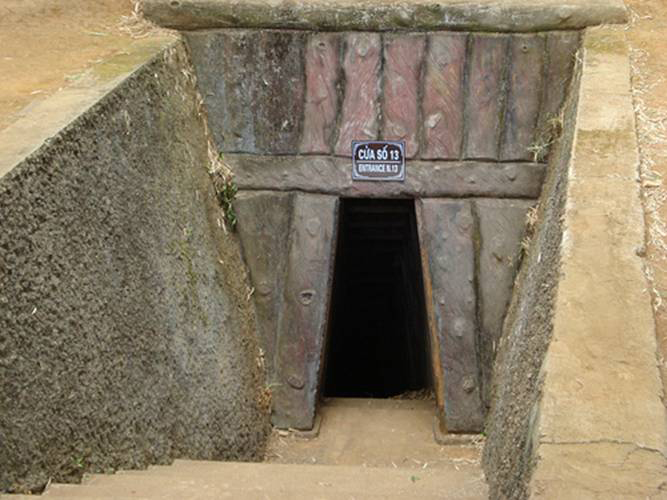 The DMZ (Demilitarized zone acronym) is an established dividing line to separate North Vietnam and South Vietnam after the Indochina war. The DMZ zone of Vietnam ranged from the border with Laos to the sea (the parallel 17). Much of this DMZ dividing line crossed the River of Ben Hai.

Americans, who lived in Southern Vietnam, wanted to force to Vinh Moc peasants to abandon their land, so as to avoid to help Northern Communist forces established on the nearby island with Co (at 28 kilometers from the coast). The people, who had no other place where refuge, refused to leave their lands and the village where he had spent most of his life. 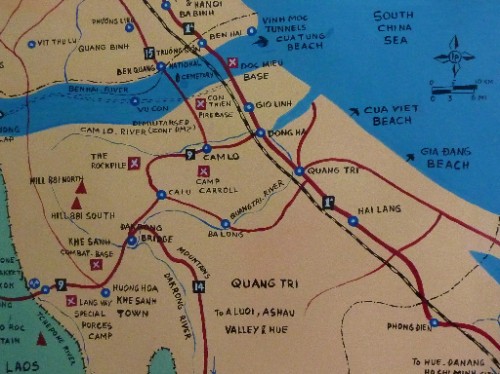 Those known of Vietnam’s heroic historical war must have some understanding of the tunnel network in Quang Tri citadel – a witness of the severe war. The Vinh Moc spectacular tunnel network within the zone stands as a testament to the endurance, wisdom and bravery of the local people in their fight for independence. 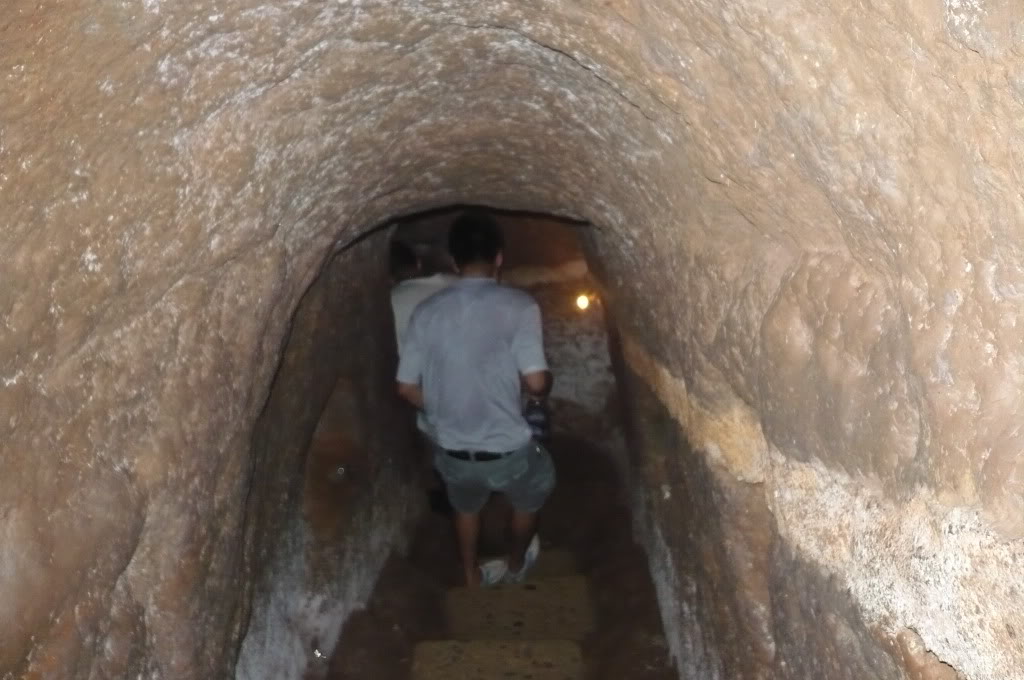 Inside the Vinh Moc Tunnels

The zone of Vinh Moc was bombed duramente, says that an average of 7 tons of bombs per each inhabitant fell. To stop all the constant casualties and better protect the community, it was decided to begin excavating a complex of tunnels under the village of Vinh Moc in 1965, thus copying performance and result of the Cu Chi tunnels located on the outskirts of the former Saigon, now Ho Chi Minh City. For them, it would be meaningless if the local people could not be protected since without the people their post would cease to exist.

Yet, of course it wasn’t that simple. The tunnels needed 5m-deep ventilation openings, and as the community within expanded, they had to develop wells, kitchens, bedrooms and health-stations. The tunnels also had to store provisions for the army and locals, and had to be able to house as well as transport hundreds of tons of rice. The tunnels are not just famous for the uniqueness of the constructors’ endeavor, but for the meticulous ingenuity of their design. All the kitchens required chimneys, which had to be able to disperse their smoke without attracting enemy planes, no easy feat for a designer who was trying to fight a war. 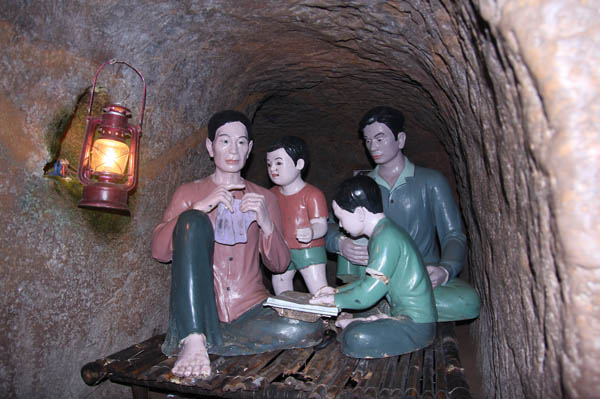 Finally, the Vinh Moc tunnels complex was built to shelter the people of Son Trung and Son Ha communes in Vinh Linh county of Quang Tri Province. It was constructed in several stages, beginning in 1966 and coming into use until 1971. Around 60 families lived in the tunnels; as many as 17 children were born inside the tunnels as well. The tunnels were a success and no villagers lost their lives thanks to them. The only direct hit was from a bomb that failed to explode, the resulting hole was utilized as a ventilation shaft.

When the underground channels were designed, the designers had the foresight to consider their protection as well as their construction. They must be well against damage long, tropical rains, and monsoon. Architects would like to visit this historical and solid shelter to figure out how their elders could succeed in constructing such a complex, huge, but firm and sufficient place of living. The tunnel is accurately a miniaturized image of a deep underground village with all necessary services (houses for all families, birthplace, health-stations, etc.), but can stand still firmly until now. The answer may be revealed in a heroic mentality and great endeavor of the people in that historical period.

Today, people no longer need the tunnel to shelter but consider it as one of the top destinations of some history-discovering tour. You are fond of history, and you prefer adventure, the foremost suggestion is a visit to Vinh Moc tunnel!

The tunnels and the Museum of Vinh Moc

Without a doubt the highlight of the visit touring the DMZ area of Vietnam are the Vinh Moc tunnels. These tunnels were opened to tourism in the year 1995 and 3 underground levels you can visit. Open on schedule from 7:00 to 16:30, the entry costs 20,000VND (less than 1€) but does not include guide. The museum presents various photographs showing how tough life in the tunnels, along with weapons and bombs dropped on the area. Probably the most interesting of Vinh Moc museum are photos showing how the tunnels were constructed, including a map of the tunnel network, making it advisable to look well at the maps of the underground galleries in addition to carry flashlights. 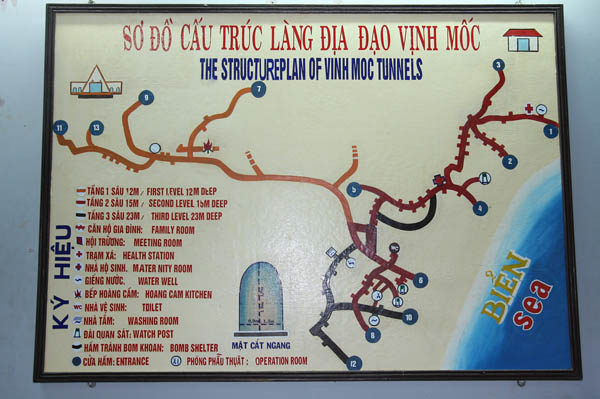 Vinh Moc tunnels are less claustrophobic to the tunnels of Cu Chi, since the climate of the area is not so damp and corridors are higher (0.9 meters wide and 1.8 meters high), allowing to walk in a manner almost straight the greater part of the journey. The main corridor is 780 meters long and has been reinforced with wood.

In the outside area of the Vinh Moc tunnels were dug 8 kilometers of trenches, which are still visible today. These trenches took 3 years to build. 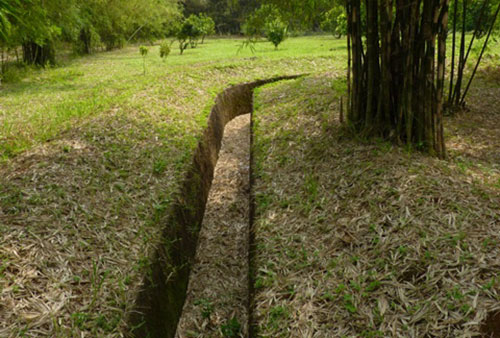 Trincheros Vinh Moc in the DMZ

How to get there

The central area of Hue has several points which played an important role in the history of the Vietnam War and which constitute a part of tourist visits to the DMZ zone of Vietnam. Sightseeing by the Vietnamese DMZ zone along the so-called Highway 1 and Highway 9, visiting his village Dong Ha, military bases Doc Mieu and Khe Sanh, the Hien Luong Bridge over Ben Hai River, the road of Ho Chi Minh City by the passage of clouds, cemetery Truong Son, Con Co island stack rock pile and the tunnels and museum of Vinh Moc.

To scroll up to the complex of Vinh Moc tunnels can go by train (station trains Sa Lung 20 kilometers of tunnels). From Hue train takes 1 hour and 30 minutes, and the price of the ticket is 1€ (with opening hours from 6:00). You can also go to the Vinh Moc tunnels in car/motorbike from Dong Ha (30 km, taking about 40 minutes). Another alternative is recommended that tourists planning to visit this area book a tour. There are a lot of day tours from Hue to DMZ area in Quang Tri for tourists to choose from. Some itineraries for reference can be found here: day tour in centre Vietnam and their prices range between 10 € the cheapest and 80 € the most expensive.

Before there is a bridge across the Ben Hai River, this river just have a ferry. Hien Luong Bridge had built since 1928 by the Government of Vinh Linh with the contribution of local people. The bridge is made of wood, piles of iron about 2m wide. It only enough for walker. In 1931, the bridge was upgraded by the Indochinese Federation but other vehicles still across the river by ferry. In 1943, it was upgraded again and in this time a small vehicles can pass. 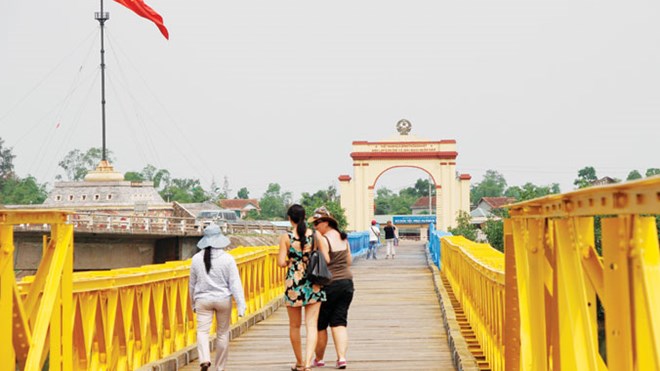 By 1950, due to military needs, French was rebuilt with reinforced concrete, 162m long, 3.6m wide, 10-ton payload. This bridge had existed for two years until the Viet Minh guerrillas was destroy bridge by bomb to stop the advance of the French. May 1952, the French built a new bridge consisting of 7 spans, 178m long, cylindrical reinforced concrete, 4m wide, both sides have a height of 1.2m sure, maximum payload of 18 tons bridge.

The bridge was divided into two parts, each 89m long and painted two different colors. There are 450 wood panels at northern and 444 wood panels at southern.

Actually this bridge too ordinary and nothing special about architecture. But why this bridge very famous? Following Vietnam War history, the country divided in 2 parts by a border that is the 17th parallel. After Gionever agreements was signed, it was chosen to divide the country. The bridge is a symbol showing the loss, separation and hurt. There is nothing hurt than when we see our country divided into two. At night the sound of fighting and gunfire rang out in bright white smoke roll up the sky. The soldier was died but their friends, family member still alive. They endure not only pain of body but also the soul.

When you research about the history in Hien Luong bridge and Ben Hai river, please don’t forget visit Truong Son Martyrs Cemetery and burn the incense to honor the unknown soldiers were falling down to get freedom for the country.

An evocative memorial to the legions of North Vietnamese soldiers who died along the Ho Chi Minh Trail, this cemetery is a sobering sight. More than 10,000 graves dot these hillsides, each marked by a simple white tombstone headed by the inscription Liet Si (martyr). Many graves lie empty, simply bearing names, representing a fraction of Vietnam’s 300,000 soldiers missing in action. 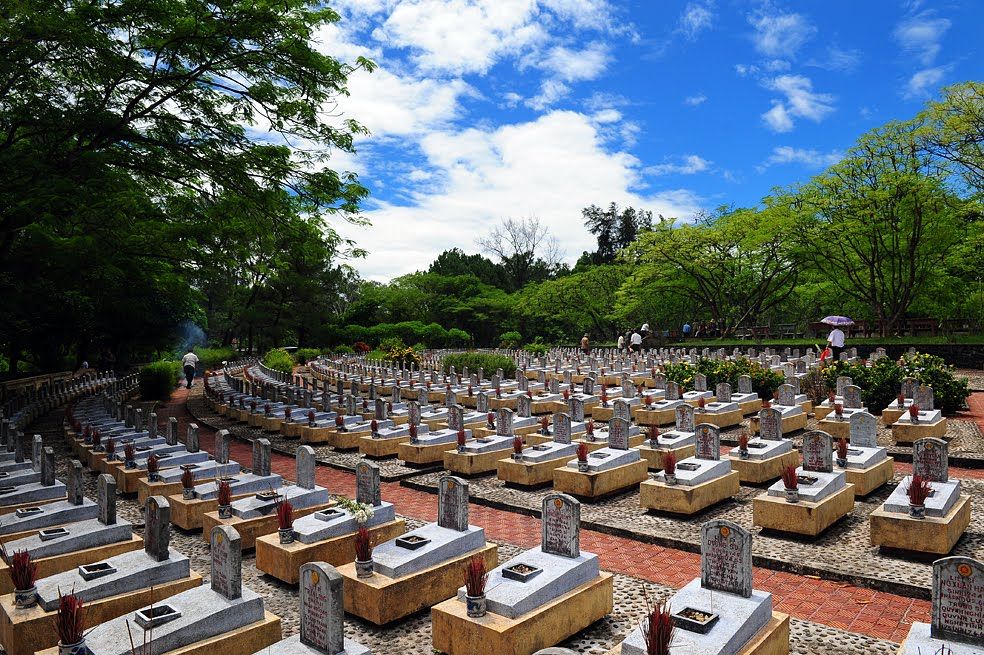 Truong Son was used as a base by the May 1959 Army Corps from 1972 to 1975. The corps had the mission of constructing and maintaining the Ho Chi Minh Trail.

The cemetery is not on most tour itineraries, and its isolated location and simple design give it a powerful dimension. It’s 27km northwest of Dong Ha; the turn-off from Hwy 1 is close to Doc Mieu.

In the vicinity of Vinh Moc and also by province of Dong Ha there are remains of several military bases, which today is jungle and war machine abandoned, e.g. military bases With Thien, Doc Mieu, Khe Sanh and camp Carroll. Military base in better condition and with greater tourist attraction is the base of Khe Sanh, where helicopters and tanks are exposed. 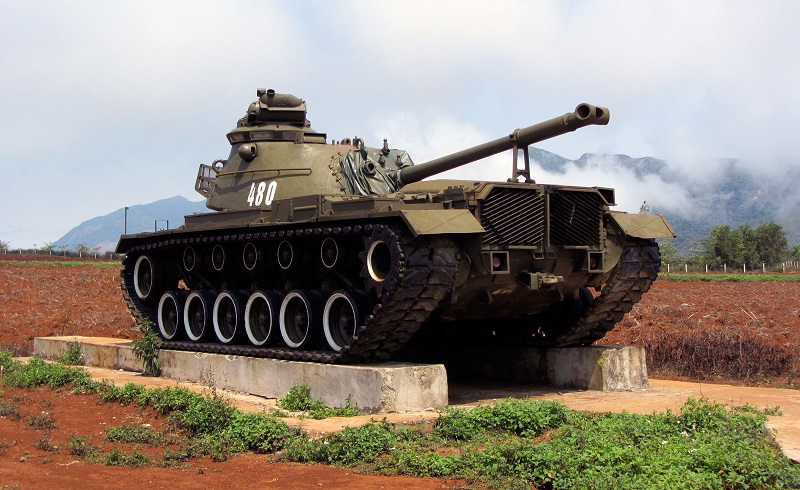 A curious part of the remains of the DMZ and the history of the war in Vietnam is a Crag called the pile of rocks (rockpile in English). With a height of 230 meters the Americans there fairway up heavy artillery and it was even used as a heliport.