During the American War, the villages around the district of Cu Chi supported a substantial Viet Cong (VC) presence. Faced with American attempts to neutralize them, they quite literally dug themselves out of harm’s way, and the legendary Cu Chi tunnels were the result. Today, tourists can visit a short stretch of the tunnels, drop to their hands and knees and squeeze underground for an insight into life as a tunnel-dwelling resistance fighter. Some sections of the tunnels have been widened to allow passage for the fuller frame of Westerners but it’s still a dark, sweaty, claustrophobic experience, and not one you should rush into unless you’re confident you won’t suffer a subterranean freak-out.

There are two sites where the tunnels can be seen – Ben Dinh and, 15km beyond, Ben Duoc, though most foreigners get taken to Ben Dinh.

When the first spades sank into the earth around Cu Chi, the region was covered by a rubber plantation tied to a French tyre company. Anti-colonial Viet Minh dug the first tunnels here in the late 1940s; intended primarily for storing arms, they soon became valuable hiding places for the resistance fighters themselves. Over a decade later, VC activists controlling this staunchly anti-government area, many of them local villagers, followed suit and went to ground. By 1965, 250km of tunnels crisscrossed Cu Chi and surrounding areas – just across the Saigon River was the notorious guerrilla power base known as the Iron Triangle – making it possible for the VC guerrilla cells in the area to link up with each other and to infiltrate Saigon at will. One section daringly ran underneath the Americans’ Cu Chi Army Base. 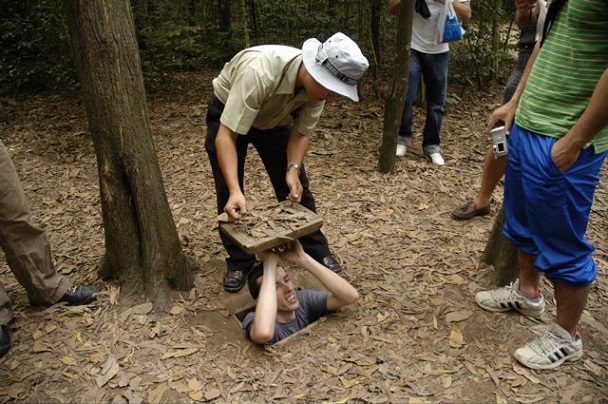 Though the region’s compacted red clay was perfectly suited to tunnelling, and lay above the water level of the Saigon River, the digging parties faced a multitude of problems. Quite apart from the snakes and scorpions they encountered as they laboured with their hoes and crowbars, there was the problem of inconspicuously disposing of the soil by spreading it in bomb craters or scattering it in the river under cover of darkness. With a tunnel dug, ceilings had to be shored up, and as American bombing made timber scarce the tunnellers had to resort to stealing iron fence posts from enemy bases. Tunnels could be as small as 80cm wide and 80cm high, and were sometimes four levels deep; vent shafts (to disperse smoke and aromas from underground ovens) were camouflaged by thick grass and termites’ nests. In order to throw the Americans’ dogs off the scent, pepper was sprinkled around vents, and sometimes the VC even washed with the same scented soap used by GIs.

Tunnel life
Living conditions below ground were appalling for these “human moles”. Tunnels were foul-smelling, and became so hot by the afternoon that inhabitants had to lie on the floor in order to get enough oxygen to breathe. The darkness was absolute, and some long-term dwellers suffered temporary blindness when they emerged into the light. At times it was necessary to stay below ground for weeks on end, alongside bats, rats, snakes, scorpions, centipedes and fire ants. Some of these unwelcome guests were co-opted to the cause: boxes full of scorpions and hollow bamboo sticks containing vipers were secreted in tunnels, where GIs might unwittingly knock them over.

Within the multi-level tunnel complexes, there were latrines, wells, meeting rooms and dorms. Rudimentary hospitals were also scratched out of the soil. Operations were carried out by torchlight using instruments fashioned from shards of ordnance, and a patient’s own blood was caught in bottles and then pumped straight back using a bicycle pump and a length of rubber hosing. Such medical supplies as existed were secured by bribing ARVN soldiers in Saigon. Doctors also administered herbs and acupuncture – even honey was used for its antiseptic properties. Kitchens cooked whatever the tunnellers could get their hands on. With rice and fruit crops destroyed, the diet consisted largely of tapioca, leaves and roots, at least until enough bomb fragments could be transported to Saigon and sold as scrap to buy food. Morale was maintained in part by performing troupes that toured the tunnels, though songs like “He who comes to Cu Chi, the Bronze Fortress in the Land of Iron, will count the crimes accumulated by the Enemy” were not quite up to the standard set by Bob Hope as he entertained the US troops.

The end of the line
​American attempts to flush out the tunnels proved ineffective. Operating out of huge bases erected around Saigon in the mid-Sixties, they evacuated villagers into strategic hamlets and then used defoliant sprays and bulldozers to rob the VC of cover, in “scorched earth” operations such as January 1967’s Cedar Falls. Even then, tunnels were rarely effectively destroyed – one soldier at the time compared the task to “fill[ing] the Grand Canyon with a pitchfork”. GIs would lob down gas or grenades or else go down themselves, armed only with a torch, a knife and a pistol. Die-hard soldiers who specialized in these underground raids came to be known as tunnel rats, their unofficial insignia Insigni Non Gratum Anus Rodentum, meaning “not worth a rat’s arse”. Booby-traps made of sharpened bamboo stakes awaited them in the dark, as well as “bombs”made from Coke cans and dud bullets found on the surface. Tunnels were low and narrow, and entrances so small that GIs often couldn’t get down them, even if they could locate them. Maverick war correspondent Wilfred Burchett, travelling with the NLF in 1964, found his Western girth a distinct impediment: “On another occasion I got stuck passing from one tunnel section to another. In what seemed a dead end, a rectangular plug was pulled out from the other side, and, with some ahead pulling my arms and some pushing my buttocks from behind, I managed to get through “I was transferred to another tunnel entrance built especially to accommodate a bulky unit cook.”

Another American tactic aimed at weakening the resolve of the VC guerrillas involved dropping leaflets and broadcasting bulletins that played on the fighters’ fears and loneliness. Although this prompted numerous desertions, the tunnellers were still able to mastermind the Tet Offensive of 1968. Ultimately, the Americans resorted to more strong-arm tactics to neutralize the tunnels, sending in the B52s freed by the cessation of bombing of the North in 1968 to level the district with carpet bombing. The VC’s infrastructure was decimated by Tet, and further weakened by the Phoenix Programme. By this time, though, the tunnels had played their part in proving to America that the war was unwinnable. At least twelve thousand Vietnamese guerrillas and sympathizers are thought to have perished here during the American War, and the terrain was laid waste – pockmarked by bomb craters, devoid of vegetation, the air poisoned by lingering fumes.