Tet is the common name for the Vietnamese New Year (Vietnamese: Tết Nguyên Đán). It is by far the country’s most important holiday, and is a bit like combining Christmas, New Year’s, and your birthday into one celebration.

The years are represented by 12 zodiac animals: rat, buffalo, tiger, cat, dragon, snake, horse, goat, monkey, rooster, dog and pig. These animals rotate through 12-year periods. Each animal has different strengths and weaknesses that they are believed to pass on to any person born in their year.

For example, 2012 was the year of the dragon (the last one of which was in 2000), the most noble and powerful of all the animals. According to tradition babies, especially boys, born during a year of the dragon are more likely to become wealthy and powerful adults. As a result, dragon years produce baby booms as couples plan to give birth during that year.

Like Chinese New Year, Tet takes place on the first day of the first month of the Lunar calendar. This usually translates to late January or early February on the Gregorian calendar. In 2016 Tet will be celebrated on February 8.

Much like Christmas, preparations for Tet begin well ahead of the holiday. Every new year is seen as a clean slate, a chance for people to begin anew and be more successful than they were in the year before. 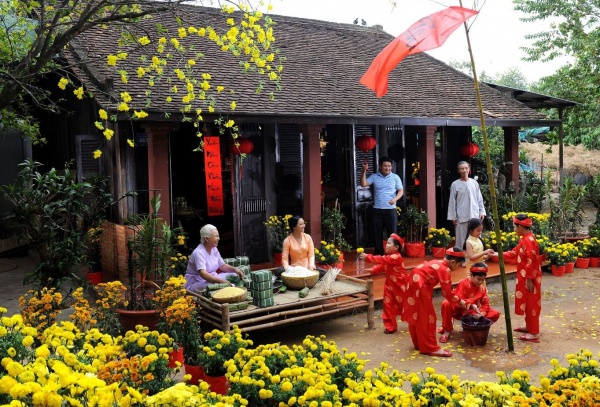 Many families renovate houses in the weeks leading up to Tet, adding even more noise to the already raucous streets of Vietnam. If a house isn’t renovated it is at least thoroughly cleaned. New outfits are purchased to signify a new change, and many people change companies or try to switch lines of work. It is also considered good luck to open a business around Tet.

There also certain types of food that become popular around Tet, the most common of which are banh chung and banh day. These consist of rice with meat or bean fillings tightly wrapped inside a leaf, and are the most important traditional Tet dishes. In the month before Tet towns and cities throughout the country set up flower streets, and families set up flower displays in front of their homes. During this period Vietnam’s streets explode with color and give a sense of vitality before the start of the new year. In Ho Chi Minh City, Vietnam’s largest city, one of downtown’s main boulevards is shut down and transformed into an elaborate flower exhibition that attracts visitors from the entire region

The three days immediately before Tet are when the holiday kicks into high gear. The cities empty as urban residents return to their family’s hometown to reunite with relatives, as Tet is really all about family. For foreigners and other people living in the city who don’t have family to visit, this is a strange experience. The normally vibrant streets are quiet, and many businesses shut down, making it somewhat difficult to visit your usual restaurants and stalls.

Other customs include the giving of Li Xi, or lucky money, to children. Relatives will fill red envelopes with small bills and give them to children in the family the day of Tet as a sign of good luck. Children are supposed to display their respect for their elders before receiving the money.

Ancestor worship is also a key part of Tet, and nearly every home in Vietnam contains a family shrine where the spirits of deceased relatives are kept. Gifts, including Li Xi and food, are placed in the shrines to keep ancestors content in the afterlife.

Most cities put on a massive fireworks display the evening of Tet, providing an explosive finish to the holiday and signaling to the nation that it is time to get back to work.

Tet is a word that may sound familiar to many, but for an unpleasant reason. On January 30, 1968 forces controlled by former North Vietnam launched a massive surprise attack against the U.S. military and the Saigon regime’s troops. This assault took place during what many people had expected to be a holiday-related cease-fire. Though the North’s forces suffered massive casualties during their assault, in the end the Tet Offensive played a large role in turning the American public against the Vietnam War.

It is a shame that Tet is still connected to the legacy of war outside of Vietnam, because inside the country it is a spectacular celebration of life, family, and the future.