Trekking through Tu Lan: the caves less traveled by

If one defines caving tourism in Vietnam as Phong Nha – Ke Bang, Tu Lan is the girl next door.
Lesser known and far wilder than the well-lit caves frequented by busloads of tourists, the Tu Lan system sits inside the limestone mountain range that surrounds the Tan Hoa valley commune in Minh Hoa District.
The valley lies north of Phong Nha on the Ho Chi Minh Road in the central province of Quang Binh. Golden corn fields pop out of the thick jungle green when one visits between April and June.
Tu Lan was discovered by local fishermen in 2009 and explored by members of the British Cave Research Association in 2010.
The 200-hectare karst cavern lies lower than its neighbors in Phong Nha – Ke Bang national park so streams twist through its center. 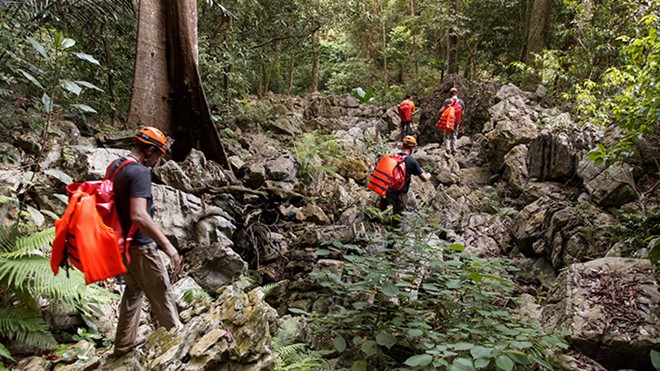 There’s only one way into Tu Lan; you have to swim.

But that is gentle enough compared to the next part: climbing over cliffs that have been standing there for hundreds of millions of years.
There are five more stretches –both swimming and climbing– inside the system, where the path rises and falls, widens and narrows.
Natural rewards pull you through, like drying your soaking clothes in the wind and sunshine on the high cliffs.
Inside Tu Lan, many rocks look almost man-made–rounded and patterned as if drawn on by cavemen. Some things look as if they must have been placed there on purpose — like the oblong stalagmites that surround a swimming hole. 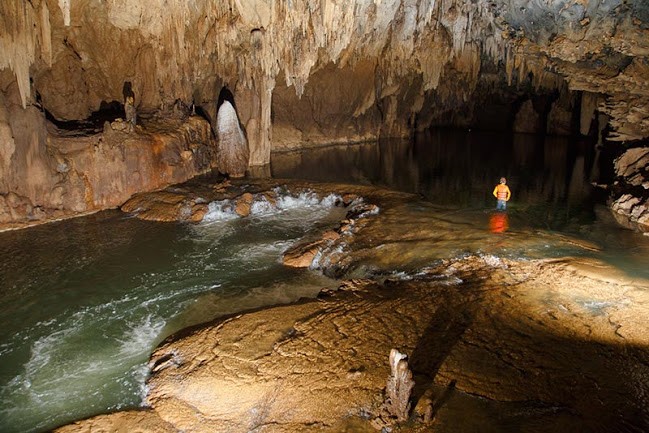 ​
The dry cave at the end of the system features a vast roof that lets the sun shine through two large openings illuminating scores of glittering stalactites inside.