Vietnam’s most evocative Cham site, MY SON, lies 40km southwest of Hoi An, in a bowl of lushly wooded hills towered over by the aptly named Cat’s Tooth Mountain. My Son may be no Vietnamese Angkor Wat, but it is now on UNESCO’s World Heritage list and richly deserves its place on the tourist map. The riot of vegetation that until recently enveloped the site has now largely been cleared away, but the tangible sense of faded majesty still hangs over the mouldering ruins, enhanced by the assorted lingam and Sanskrit stelae strewn around and by the isolated rural setting, whose peace is broken only by the wood-gatherers who trace the paths around the surrounding coffee and eucalyptus glades. The groups of buildings labelled B, C and D most warrant your attention: viewing these, it’s possible, with a little stirring of the imagination, to visualize how a functioning temple complex would have appeared in My Son’s heyday.

Excavations at My Son have revealed that Cham kings were buried here as early as the fourth century, indicating that the site was established by the rulers of the early Champa capital of Simhapura, sited some 30km back towards the highway, at present-day Tra Kieu. The stone towers and sanctuaries whose remnants you see today were erected between the seventh and thirteenth centuries, with successive dynasties adding more temples to this holy place, until in its prime it comprised some seventy buildings. The area was considered the domain of gods and god-kings, and living on site would have been an attendant population of priests, dancers and servants.

French archeologists discovered the ruins in the late nineteenth century, when the Chams’ fine masonry skills were still evident – instead of mortar, they used a resin mixed with ground brick and mollusc shells, which left only hairline cracks between brick courses. After the Viet Cong based themselves here in the 1960s, many unique buildings were pounded to oblivion by American B52s, most notably the once magnificent A1 tower. Craters around the site and masonry pocked with shell and bullet holes testify to this tragic period in My Son’s history. Archeologists regard Group B as the spiritual epicentre of My Son. Of the central kalan (sanctuary), marked on maps as B1, only the base remains, along with a lingam discovered under the foundations a few years ago; but stone epitaphs found nearby reveal that it was dedicated to the god-king Bhadresvara, a hybrid of Shiva and fourth-century King Bhadravarman, and erected in the eleventh century, under King Harivarman IV, on the site of an earlier, wooden temple.

THE REPONSITORY ROOM AND AROUND B1

Fortunately, other elements of Group B have fared rather better, particularly B5, the impressive repository room. Votive offerings and other ritual paraphernalia would have been stored in B5’s chimney-shaped interior, while its outer walls support ornate columns and statues of deities. The carving on the southern facade is particularly well preserved; on the west look out for a fine bas-relief depicting two elephants with their trunks entwined around a coconut tree.

The carving of Vishnu sitting below the thirteen heads of the snake-god Naga that adorned the roof of B6 was an early casualty of war, but the oval receptacle for the holy water used in purification rituals and statue-washing ceremonies is still intact inside. The two smaller temples flanking B1’s south side, B3 and B4, would have been dedicated to Skanda and Ganesha, the children of Shiva, while posted around the complex are the remains of seven tiny shrines honouring the gods of the elements and of the points of the compass. 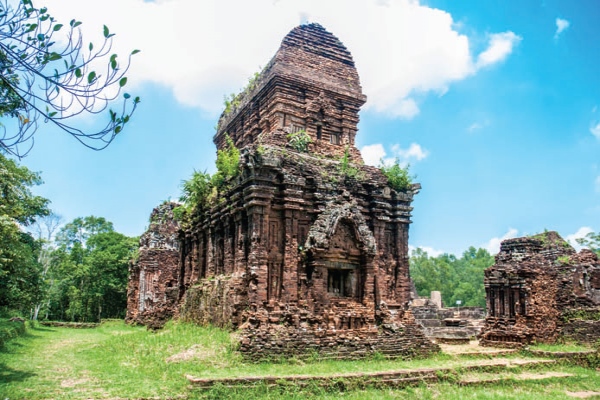 Originally separated from Group B by a wall, the Group C complex is quite distinct from it. This time the central kalan, C1, is standing and fairly well preserved, though the statue of Shiva that it was built to house long since went to Da Nang’s museum, leaving only its base in place. The statues of standing gods around the walls have been allowed to stay, though, as has the carved lintel that runs across the entrance.

East of B and C, the two long, windowed mandapa (meditation halls) that comprise Group D have now both been converted into modest galleries. Precisely aligned with the foundations of B1 is D1, the mandapa, where the priests would meditate prior to proceeding through the (now ruined) gate B2 to worship. It also contains a lingam, the remains of a carving of Shiva, and a statue of Nandi, Shiva’s bull, while in D2 you’ll see a fine rendition of many-armed Shiva dancing, and, beside the steps up to its eastern entrance, an impressive statue of Vishnu’s vehicle, Garuda. The ground between these two galleries was named the Court of Stelae by early archeologists, a reference to the stone tablets, etched with Sanskrit script, that litter it. As well as these stelae, altars and statues of deities would have stood in the court, though all that remain of these are their plinths, on whose sides are sculpted images of dancing women, arms raised to carry their gods. 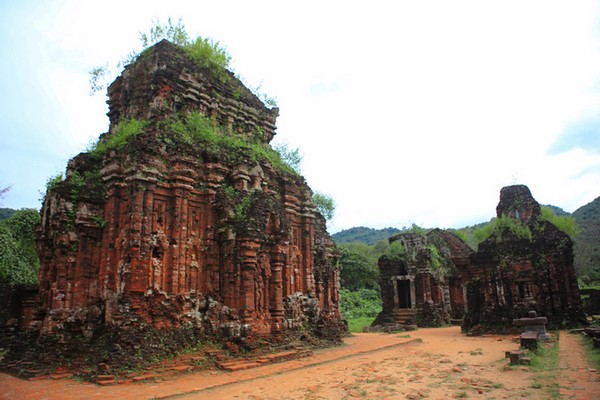 GROUP A AND D

East of Group D, signs direct you to Groups A and G. Bomb damage was particularly cruel in the vicinity of Group A, reducing the once spectacular kalan, A1, to a heap of toppled columns and lintels that closely resembles a collapsed hall of cards. Unusually, A1 was constructed with both an eastern and a western entrance. Within, a huge lingam base is ringed by a number of detailed, fifteen-centimetre-high figures at prayer. You’ll pass A9, the mandapa, and A8, the gate, en route from B, C and D; A11 would have been the repository room.

The remains of hilltop Group G, 60m north of Group A, are equally poorly preserved. However, you can still pick out horned gargoyles, sporting fangs and bulbous eyes, carved into the corners of the main kalan. The base of a lingam stands at the kalan’s southwestern corner, with breasts around its base.