When mention to Vietnamese women, you cannot pretermit “Ao Dai” (a long dress) or “wherever Vietnamese women live, the Ao Dai has been there, too”. “Ao Dai” is national costume of the Vietnamese people which designed with the cut of 2 pieces is at the waist, tightened the body from neck to knees. Ao Dai is a unique design which both charming and sexy. Although the dress covers the entire body but shows every curve of a body. "The ao dai covers everything, but hides nothing", according to one saying. For the beginning, Ao dai is for both men & women but now most commonly worn by women. The Ao Dai is now standard for weddings, for celebrating Tet and for other formal occasions. A plain white ao dai is a common high school uniform. 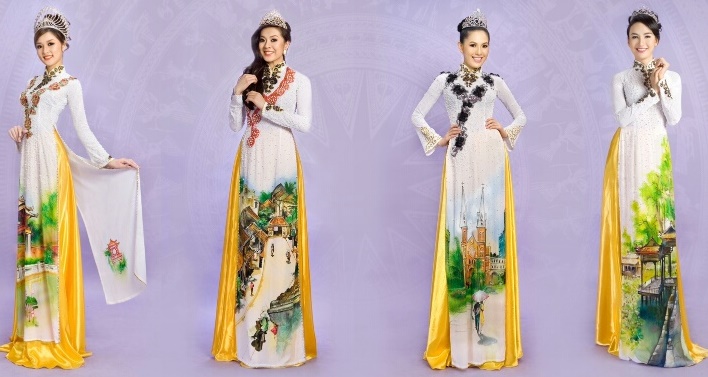 Ao Dai Vietnam
Ao Dai is not only standard outfit of the Vietnamese people but also it contains a lot of meanings in each contours of it. The Ao Dai is national costume which shown identity and ‘national soul’ of Vietnam. Underwent the wars, although the Ao Dai was rarely worn but praised as a national costume and worn to the Paris Peace Conference (1968–73) by Vietcong negotiator Nguyen Thi Binh, and exists as an amazing artwork of national identity of Vietnam with both of elegance and slender but forceful in design. Ao Dai is Vietnamese national costume. It’s also a symbol of Vietnam as well as pride of Vietnamese women.
In fact, nobody knows the original history of Ao Dai, just know that once it appears it becomes a popular fashion at first. Over time, the traditional Ao Dai has gone through certain changes but has separately maintained its own characteristics. Nowadays, Ao Dai is not only Vietnamese nation costume but also is a symbol helps promote Vietnam’s image throughout the world. Ao Dai is always worn as traditional costume of Vietnam in the international beauty contests.
The Ao Dai was introduced in Tours City, France for the first time in June, 2001 as an intangible cultural heritage of Vietnam with the participation of more than 300 Vietnamese culture fans. The Ao Dai is not only Vietnamese women’s but it contains the extremely special spiritual meaning. Therefore, Ao Dai is always the first choice for special events.
The Ao Dai also always was choose as the official outfit for the International Events was held in Vietnam, one of them is the 14th Asia Pacific Economic Cooperation 2006 in Hanoi. Besides, Vietnamese designers created Ao Dai for the contestants in the Miss Universe beauty contest, which was held July 2008 in Nha Trang, Vietnam and received many highly recommend from the experts as well as tourists. The main material is silk, sometimes velvet was used with various colors as well as decorations which Normal was made by hand. Presidents & Prime Ministers in the stylized Vietnamese costumes for men in APEC 2006
With the develop of the country and the develop of the fashion, Ao Dai is also developed. Ao Dai nowadays is more fashionable and more popular. Although there are many changes was created by Designers but it still kept the “Nation Soul”, especial in the beauty contests, fashion shows. The most Famous designers of Vietnam was known throughout the world is Minh Hanh, Sy Hoang, Vo Viet Chung, La Hang,… They are all contributed their creations to promote Vietnamese image as well as Ao Dai which consider as one of the symbol of Vietnam around the world.