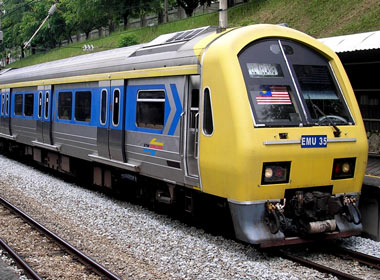 The Vietnamese railways are an excellent, safe and comfortable way of getting around and seeing Vietnam at ground level. The main line links Hanoi, Hue, Danang, Nha Trang and Saigon (Ho Chi Minh City). There is also a railway between Hanoi and Haiphong… The Reunification Express? Trains between Hanoi and Saigon are sometimes referred to as the ‘Reunification Express’ by guide books or tourist agencies. However, there are now many trains on this route and no single train officially carries this name. The Vietnamese railways are an excellent, safe and comfortable way of getting around and seeing Vietnam at ground level.

In case you were wondering, ‘Ho Chi Minh City’ is the name of the whole conurbation – ‘Saigon’ is still the name of the city itself, and it is ‘Saigon’ which appears in the railway timetables and on the station name boards…

Train S3 from Hanoi to Saigon passes through the lush green hills between Hué and Danang. This is the most scenic section of line, running along the coast past bays and islands and through the hills. The train travels at low speed up the fierce gradients, with an assisting locomotive at the rear and people sitting on the roof..!

Soft class 4-berth sleeper, most modern type on trains SE2-SE4-SE8 (from HCM to Ha Noi ) & SE1-SE3-SE7 (from Ha Noi-HCM). The other two berths are just out of shot to the left

The best and fastest train in Vietnam is train E1 (Southbound) / E2 (Northbound) introduced in 2002. This train uses the most modern rolling stock, with large picture windows unobstructed by the wire mesh that protects most other trains’ windows from stones. Choose this train if you can, but it’s proving very popular, and it’s often difficult to get berths on unless you book well in advance.

The second best train in Vietnam is train S1 (Southbound) / S2 (Northbound), pictured below left. The S1/S2 coaches are all refurbished and painted red whereas most other Vietnamese trains are green. The next best train is the S3 / S4. Each of these trains has a full range of classes of accommodation. Other trains generally use rolling stock that is much older.

Note: Trains don’t stop to get and return guest at stations marked “-”