Vietnam has a history as rich and evocative as anywhere on the planet. Sure, the American War in Vietnam captured the attention of the West, but centuries before that Vietnam was scrapping with the Chinese, the Khmers, the Chams and the Mongols. Vietnamese civilisation is as sophisticated as that of its mighty northern neighbour China, from where it drew many of its influences under a thousand-year occupation. Later came the French and the humbling period of colonialism from which Vietnam was not to emerge until the second half of the 20th century. The Americans were simply the last in a long line of invaders who had come and gone through the centuries and, no matter what was required or how long it took, they too would be vanquished. If only the planners back in Washington had paid just a little more attention to the history of this very proud nation, then Vietnam might have avoided the trauma and tragedy of a horribly brutal war.

Visitors to Vietnam can’t help but notice that the same names pop up again and again on the streets of every city and town. These are Vietnam’s national heroes who, over the last 2000 years, have led the country in its repeated expulsions of foreign invaders and whose exploits have inspired subsequent generations of patriots. 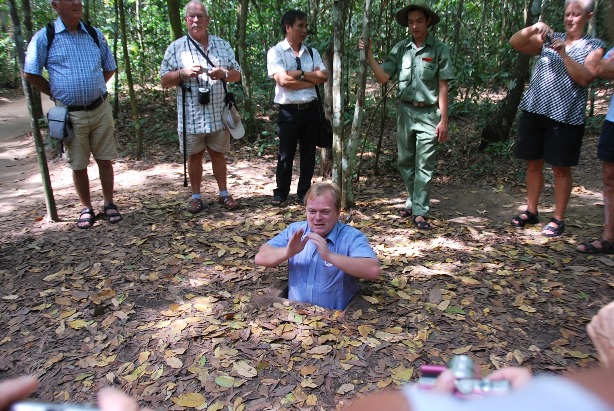 About 2,000 years ago people in North Vietnam began growing rice in the Red River Valley. To irrigate their crops they built dykes and dug canals. They were forced to work together and so an organised kingdom emerged called Van Lang. However in the 2nd century BC the Chinese conquered the area.
The Chinese ruled northern Vietnam for more than 1,000 years and Chinese civilization had a great impact on the Vietnamese.
However in South Vietnam there was Indian influence. From the 1st century to the 6th century AD the southernmost part of Vietnam was part of a state called Funan.
In the middle of Vietnam an Indian influenced state called Champa arose in the 2nd century AD.
In North Vietnam the people resented Chinese rule and in 40 AD the Trung sisters led a rebellion. They formed an independent state. However in 43 AD the Chinese crushed the rebellion and the sisters killed themselves. The Chinese continued to rule North Vietnam until the 10th century. Finally in 938 a leader named Ngo Quyen defeated the Chinese at the battle of Bach Dang River and North Vietnam became an independent state.
In the 13th century the Mongols invaded Vietnam three times. In 1257 and 1284 they captured the capital but each time they soon withdrew. Then in 1288 the Vietnamese leader Tran Hung Dao routed the Mongols at the Bach Dang River.
However in the early 15th century China tried to regain control of North Vietnam. In 1407 they occupied the country but their rule was resisted. In 1418 Le Loi began the Lam Son Uprising. By 1428 the Chinese were driven out and Le Loi became the Emperor Le Thai To. Under his successors the central Vietnamese state of Champa became a vassal state of North Vietnam.
However in the early 16th century the power of the Le dynasty declined. During the 17th and 18th centuries two rival families effectively held power, the Trinh in the north and the Nguyen in the south. The Nguyen family conquered the Mekong Delta from the Khmer Empire.
In the 1770s a rebellion began in the town of Tay Son. Three brothers called Nguyen led it. Gradually they took territory from the Nguyen lords in the south and the Trinh lords in the north. By 1786 they were in control of the whole of Vietnam and one brother, Nguyen Hue made himself Emperor Quang Trung. In 1788 the Chinese intervened in Vietnam but the Vietnamese routed them at Dong Da.
However a Nguyen lord named Nguyen Anh escaped. He raised an army and from 1789 he pushed back the rebels. Nguyen Anh took Hanoi in 1802 and made himself Emperor Gia Long. Under him Vietnam became a strong united kingdom.
Meanwhile the Portuguese reached Vietnam by sea in 1516. In their wake came missionaries, first Dominicans then Jesuits and the Roman Catholic Church made some headway in Vietnam.

The French in Vietnam

In the late 19th century Vietnam became a French colony. However the French took over Vietnam in stages. In 1859 they captured Saigon. Finally in 1883 North and Central Vietnam was forced to become a French protectorate.
The French built infrastructure in Vietnam such as the Saigon to Hanoi railway. They also built roads and bridges. However the building was funded by heavy taxation. Naturally the Vietnamese wanted independence. The Communists spearheaded the struggle for independence. Ho Chi Minh founded the Revolutionary Youth League from the safety of China in 1925. In 1930 it became the Vietnamese Communist party.
In 1940 the Germans defeated France. Japan decided to take advantage of French weakness and they forced the French government to allow Japanese troops to occupy French Indo-China, although they left the French administration in place.
The Vietnamese Communists or Viet Minh fought the Japanese and by 1945 they controlled parts of North Vietnam. Meanwhile in March 1945 the Japanese took control of the administration of Vietnam and when Japan surrendered on 15 August 1945 they left a power vacuum.
Ho Chi Minh moved quickly to fill the vacuum. He called for an uprising called the August Revolution and the Viet Minh took control of most of Vietnam. On 2 September 1945 Ho Chi Minh declared Vietnam independent.
However the great powers ignored the Vietnamese demand for independence. Under the terms of the Potsdam Conference Japanese troops south of the 16th parallel surrendered to the British. Those to the north surrendered to the Nationalist Chinese.
However the French army soon arrived in the south to take control from the British. In the north Chinese troops moved in. However Ho Chi Minh soon decided that the French were the lesser of two evils and he signed a treaty, which said that French troops should replace Chinese troops in North Vietnam for 5 years. In return the French promised to recognized Vietnam as a 'free state'.
However it soon became clear the French had no intention of giving up power in Vietnam and fighting broke out between them and the Viet Minh.
For eight years the Viet Minh fought a guerrilla war against the French. Finally in 1954 they surrounded a French army at Dien Bien Phu. After a siege lasting 57 days the French were forced to surrender. By then it was clear that the French could not win the war and both sides met at the Geneva Conference to end the war. They agreed that Vietnam would be temporarily divided at the 17th parallel and elections would be held by 20 July 1956. However no elections were held and the division of Vietnam became permanent.

In the north, Ho Chi Minh introduced a Communist regime while in the south Ngo Dinh Diem became ruler. However in the early 1960s South Vietnam was rocked by demonstrations and in 1963 Diem was ousted in a coup.
Meanwhile in 1959 the North Vietnamese began a long guerrilla war to reunite Vietnam under Communist rule. The Northern Guerrillas were known as the Vietcong.
Gradually the USA became involved in the Vietnam War. As early as 1950 the US sent military advisers to South Vietnam. Financially they supported the French and later the South Vietnamese government.
Then in 1964 two US ships were supposedly subject to 'unprovoked' attacks by the North Vietnamese. First the Maddox was attacked. Two days later the Maddox and a ship called the C Turner Joy claimed they were both attacked. (It is doubtful if this attack ever took place).
The Americans then bombed the north and Congress passed the Tonkin Gulf Resolution allowing the president to take 'all necessary measures' to prevent 'further aggression'. As a result by December 1965 there were 183,000 US soldiers in Vietnam and by the end of 1967 there were nearly half a million. However the Vietcong continued their guerrilla war.
In January 1968 the Vietcong launched the Tet offensive in towns and cities across South Vietnam. They suffered heavy losses but afterwards the Americans gradually withdrew from Vietnam. In January 1973 they signed a ceasefire and the remaining American troops withdrew.
The South Vietnamese continued to fight the Vietcong alone. However in the early months of 1975 South Vietnamese resistance collapsed and on 30 April 1975 the North Vietnamese captured Saigon. Vietnam was reunited under Communist rule.
Then in the late 1970s the Khmer Rouge made attacks on Vietnam. So in 1978 the Vietnamese occupied Cambodia. They stayed until 1989.
Meanwhile in 1986 the Vietnamese government introduced market reforms. As a result the Vietnamese economy began to grow rapidly. In 1994 the USA lifted an economic embargo on Vietnam and in 1995 diplomatic relations were restored.
Today the Vietnamese economy is booming and Vietnam is being transformed into an industrial country. Tourism is an important industry in Vietnam. Furthermore a stock exchange opened in Vietnam in 2000.
Today the population of Vietnam is 91.9 million.
​Get Our Newsletter Join us for updates, insider reports & special offers.