The unique festival of Tro Tram which is both sacred and filled with national culture takes place annually at Tu Xa commune, Lam Thao district, Phu Tho province. Aiming at promoting human's vitality, the festival closely related to "no nuong"-reproductive organs. 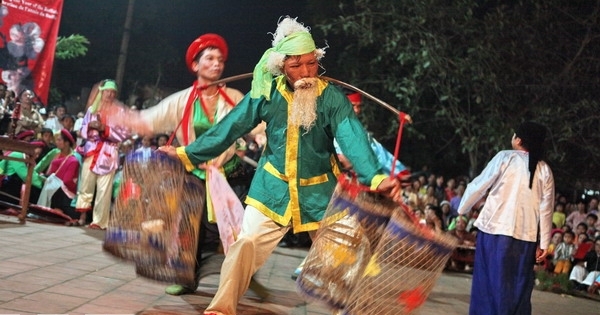 The sacred and precious “no nuong” are stored in a place nearby call Mieu shrine. Originally, they were made from jackfruit wood. Local residents put these two things into a small box, and then that small box is put into a big box. Every box and also all doors in the shrine are locked carefully, and the keys are singly held by the shrine keeper. All of these clearly prove that “no nuong” are in great respect among Tu Xa people.
Every year, in the first lunar month, at the 11th day’s midnight, the shrine door is opened, and “no nuong” are put on the worshipping table which has fruits, chickens, incense. The shrine keeper prays for abundance of crop, wealth, health, vitality, and offspring—all of which are believed to turn Vietnam into a strong and prosperous nation with powerful race. The festival is conducted in front of hundreds of participants, regardless of ages, in beautiful traditional holiday costume.
The most hallowed as well as subtle rite takes place in the shift to the next day—“le mat", the most expecting moment in the mind of every person. A muscular man holds the “no” (male genital), and a graceful woman holds the “nuong” (female genital). In the exciting cheers of audience “Linh tinh, tinh phoc”, the “no” hits the “nường”. After three times of “Linh tinh, tinh phoc”, the ritual of “le mat” ends. Joyfully, everyone attend another appealing part of the night, with several pieces of love are made. Youthful people—boys and girls—are free to express feelings, opening up their soul. Also, those who used to miss each other in the past now have chance to recall their young and naive days.
TIME: 11th midnight of 1st lunar month
PURPOSE: promote human’s vitality through the image of “no nuong”
ACTIVITIES:
Ceremonies: offerings, praying, “le mat” rite
Entertaining activities: lots of loves are made
​Get Our Newsletter Join us for updates, insider reports & special offers.