Taking place annually in the tenth full moon in Vietnamese Lunar calendar, Ooc Om Boc (or Ok Om Bok) is one of the three biggest festivals among ethnic Khmer community - especially in Tra Vinh and Soc Trang province where is the typical habitat of Khmer people. 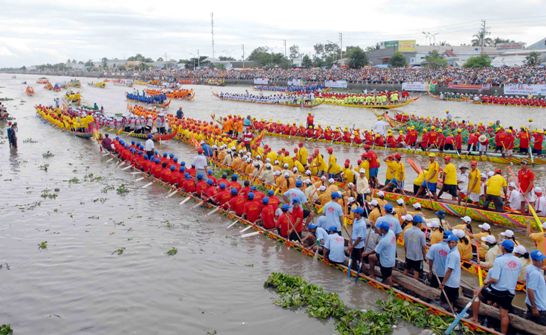 Originally, the festival is about worshipping the moon, thanksgiving as well as praying for abundant harvest. Also, according to Khmer’s custom, the tenth Lunar month is considered the end of the year in Khmer’s custom; hence, the festival’s purpose is to celebrate for a year has passed.
Towards Khmer people, the moon rules weather and crops within a year. As a result, at midnight when the moon is at its highest position, a wide variety of agricultural products are used as offerings, for example: bananas, coconuts, sweet potatoes, and new sticky rice — the most important.
The occasion’s highlight is the race of ghe ngo, a special kind of timber boat (ghe means boat) which is in the shape of a Khmer’s sacred object —nagar snake. Attending the race are 30 groups of young men and 10 groups of young women gently moving in harmony among the sound of gongs and waves, with the observance of a large audience. The team who crosses the finish line first will receive loud and enthusiastic cheers from the crowds along the riverbanks and be awarded with great prize.
Other activities held in the event include performances of ethnic music and dance, exhibitions of artistic works, and workshops on agricultural development, which lures tourists to an animated and excited atmosphere.
TIME: 10th full moon
PURPOSE: worship moon genie and celebrate a year’s end according to Khmer’s custom
ACTIVITIES: moon offering, ghe ngo racing, dancing
​Get Our Newsletter Join us for updates, insider reports & special offers.