Le Mat is a small village at Viet Hung Ward, Long Bien District, about 7 kilometers away from Hanoi, which is famous for its tradition of catching snakes and making delicious food from them. To honor such a long standing profession, the village's festival transpires annually on the 23rd day of the third lunar month. 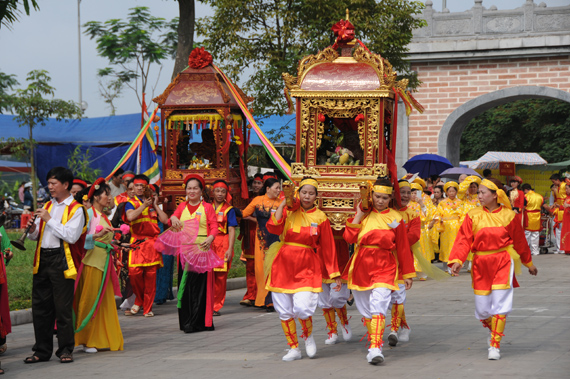 According to folklore, in the reign of King Ly Thai Tong, the princess’s boat once was turned over by a huge snake when she took sightseeing at Nguyet Duc River (Duong River nowadays). The princess’s life was threatened; fortunately, a man of Le Mat village working nearby the river jumped into the water, fought the snake and saved her life. After that, King Ly Nhan Tong intended to reward him with an abundance of precious stuff together with a high position in his dynasty. To the King’s surprise, the young man refused them all—in stead, he asked the King to break the ground near Thang Long together with the people in his village and neighboring ones. Under Ly Thai Tong’s approval, gradually, the area turned into a wealthy hub. The man of great merit became Le Mat village’s tutelary god. To express their gratitude, villagers constructed a temple worshipping him and added catching snakes to their profession—apart from the usual work of farming. As a result, several cultural activities about snake are held each year at Le Mat village, including the festival.
Le Mat Snake Village Festival usually takes place from the 20th day to the 24th day of the third lunar month, with the main festive day on the 23rd. At the early morning of this day, representative ancestors of the 13 camps at the old land near Thang Long in the past bring 13 trays of offerings from the capital to Le Mat village. A water procession marks the festival’s start, in which water is taken from the pond, poured into a big porcelain jar, put on a palanquin and brought to the temple. A big fish caught from the mentioned pond and covered in red cloth is used as offering for the tutelary god. When ceremonies are over, the scene when the young man killed the huge and save the princess is represented among the vibrant sounds of drums. Snake-related competitions are held—for example, snake catching, snake breeding, and snake venom curing. Also, a cup of snake wine with three or five snakes inside may be given to festival goers.
TIME: 20th-24th day of 3rd lunar month
PURPOSE: honor the profession of snake catching
ACTIVITIES: offerings and processions; snake-related competitions
​Get Our Newsletter Join us for updates, insider reports & special offers.