Situated on Duy Nhat Commune, Vu Thu District, Thai Binh Province, Keo Pagoda is one of the most unique and spectacular structure of Vietnam. With the custom of worshiping Buddhist priest Khong Lo - Ly Quoc Su, Keo Festival is held in two periods of time in the spring and in the autumn: on the fourth day of the first lunar month, and from the 13th to the 15th day of the ninth lunar month. 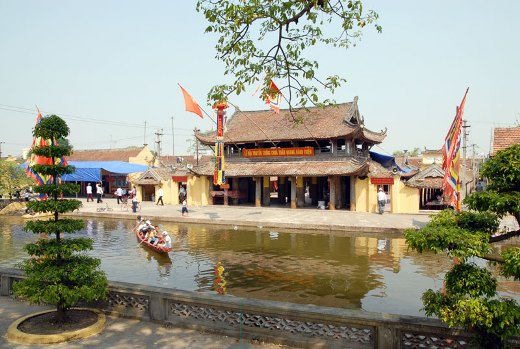 ​
It seems that the festival casts a spell on residents of all ages and social statuses. According to folk stories, Priest Khong Lo was competent in doing Buddhist magic, and he once cured Emperor Ly Nhan Tong from scaring chameleon’s cry. Hence, it can be understandable that the indispensable part of Keo Festival is Buddhist ceremonies. The festival at the ninth lunar month is the main event as the14th day of this month is not only Khong Lo’s birthday but also the 100th day after the date of his death—the third day of the sixth month in lunar calendar.
The main ritual of the spring festival is a procession emulating main events in Khong Lo’s life. Similarly, the autumn festival consists of various processions. On the 13th, the festival begins with a palanquin procession commemorating the 100th day after Khong Lo’s death, and continues with swimming race at the afternoon of the same day. Offerings of incense and procession with horses, palanquin and flags are conducted at the morning of the 14th. At the afternoon, a traditional dance imitating frog’s movement is performed at Gia Roi Hall. Activities on the 15th are similar to its previous day, plus some special performances after the procession.
Together with a rich diversity of folk acts, Keo Festival lasts through three continuous days with great buzz and hustle. Also, it clearly illustrates the residents’ lifestyle at the riverside area of Duy Nhat Commune and sharply depicts the agricultural culture of Vietnam’s Northern Delta with its most vivid color.
TIME:
Spring period: 4th day of 1st lunar month
Autumn period: 13th-15th day of 9th lunar month (main event)
PURPOSE: commemorate Ly Quoc Su—Priest Khong Lo
ACTIVITIES:
Spring festival: Khong Lo’s life representation
Autumn festival: palanquin procession, incense offerings; swimming race, traditional dances
​Get Our Newsletter Join us for updates, insider reports & special offers.