The noble festival of Cham ethnic minority group - Kate, also known as Mbang Kate-owns unique cultural features and is of great importance within the community. 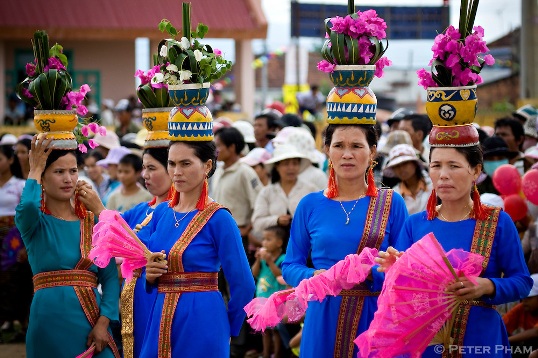 Usually taking place from the first day of the seventh month in Cham calendar (about the 9th or 10th lunar month) and lasting for three days, Kate festival is for commemorating the dead and honoring the heroes that was canonized according to Cham’s custom. The festival is not only related to aged towels and temples maintaining the highest technical and artistic values among Cham community but also about other aspects of Cham culture: costumes, offerings, musical instruments, and traditional hymns. Participants find themselves eagerly join together with Cham girls in colorful folk dances — one of the treasures of Cham people — and passionately drown into the sounds of Gi Nang drums, Paranung drums and Sanarai trumpets. They are at rest and full of happiness, visiting and praising one another.
Kate festival takes place in three different temples in Ninh Thuan province at the same time and same date. Basically, the ritual parts of Kate festival are the same among the three temples, including ceremonies for welcoming costumes, opening temples’ gates, ‘bathing’ gods’ statues, changing the statues’ costumes, and the main ceremony with offerings of goat meat, chicken, rice, wine, fruits and so on. When the sacred dances end, outside the Cham temples there are boisterous parties which will be over at the evening on the second day of the festival.
The last day of Kate is at each single village, after the festival at three towels. In the morning, at the village’s community house, offerings are given and prayers are sent. Normally, the ones performing these acts are widely respected among villagers and are proficient at traditional customs. On behalf of their community, they communicate with the gods (which are varied among different villages) — offering them oblations and wishing all the best for their people. At this level, the game part is much more simple — there are competitions of weaving, playing soccer, and performances of folk songs.
On a smaller scale, Kate rituals are conducted among families, which are lead by householders with the presence of all family’s members. This is the valuable time for family admiration and connection after a year of hard work.
All in all, Kate festival is the epitome for cultural diversity and richness among the ethnic minority groups of Vietnam.
TIME: 9th or 10th lunar month
PURPOSE: commemorate the dead and honor heroes in Cham community
ACTIVITIES:
Ceremonies: costume welcoming, gate opening, statues’ bathing, statues’ costumes changing, offerings, praying
Entertaining activities: parties, folk dances, weaving competitions, and so on
​Get Our Newsletter Join us for updates, insider reports & special offers.