Giong Festival is annually celebrated in spring time at several parts of Hanoi in order to commemorate Saint Giong, one of the four immortals of Vietnam. He is a great hero in Vietnam's mythology, with his splendid merit in defending the country against foreign enemies. 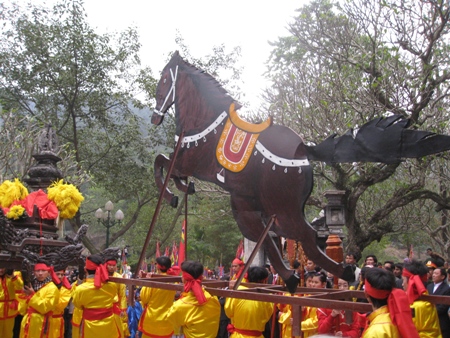 The Ceremonies at Giong Festival
According to cultural experts, the festivals held in Phu Dong Temple (where Saint Giong was born) and Soc Temple (where he ascended to heaven) are the most meaningful and notable, which have been recognized by UNESCO as an intangible cultural heritage of mankind.
This cultural event is unique in that it is completely preserved and continuously passed on through generations despite fluctuations of time. Depending on destinations, the festival takes place in different occasions in the year.

The Giong Festival at Soc Temple

TIME: 6th-8th day of 1st lunar month
PURPOSE: commemorate Saint Giong, hope for abundant harvests and happy lives
ACTIVITIES:
CEREMONIES: cleaning Saint Giong’s statue, processions, incense offerings
ENTERTAINMENT ACTIVITIES: playing folk games, enjoying traditional singings
Located on Soc Son District, Phu Linh Commune is the place where Saint Giong took the last rest before he ascended to heaven. With the hope for abundant harvests and happier lives, Soc Son’s Giong Festival is celebrated during 3 days from the 6th to the 8th of the first lunar month with ceremonies ranking from ‘khai quang’ (‘bathing’ the Saint’s statue) to processions and incense offerings.
Before the festival actually starts, a special ritual is conducted on the 5th in which villagers invite Saint Giong to come back with full of well prepared oblations. On the 6th at midnight, Saint Giong’s statue is cleaned in the presence of villagers as well as pilgrims. The main festive day is on the 7th day, the day when Saint Giong sanctified, in which processions of bamboo flowers to Soc temple are offered and reproduction of slaying the invaders’ general is performed.
In addition, the festival provides its goers a chance to immerse themselves in abundance of entertaining activities, including gleeful folk games and traditional singing performances.

TIME: 8th-9th day of 4th lunar month
PURPOSE: commemorate Saint Giong, express patriotism
CEREMONIES: plays resembling Saint Giong’s battle
ENTERTAINING ACTIVITIES: folk games
Phu Dong’s Giong Festival is on the 8th and 9th day of the fourth lunar month, and it plays an important role enhancing patriotism among the country. Its rituals represent the Saint’s feats in the battle against An army, for example: riding a white horse into battle and organizing a sophisticated flag dance to symbolize the battle itself.
Phu Dong’s Giong Festival might be regarded a huge folk theater with hundreds of roles, following a standardized script. From props, costumes, to chapters and characters—each of them contains profound meaning. In the festival, there are 28 girls (from 9 to 13 years old) playing the generals of An invaders. In the dance, the character 令on the red flag indicates that military commands should be strictly followed. The dance’s movements, along with the sound of drums and gongs, express the changes of the battle. After the festival, a sign of raining is seen as Saint Giong’s benediction for an abundant harvest.
Apart from ritual activities, there are also a wide range of folk games, which effectively draw local residents and visitors to the festival.
​Get Our Newsletter Join us for updates, insider reports & special offers.