Buffalo fighting is a unique and traditional festival of people in Do Son District, Haiphong City. This festival is not only associated with Water Goddess worshiping and sacrificing custom but also expressed bravery, chivalry, and risk-taking spirit of people in the coastal city of Haiphong. 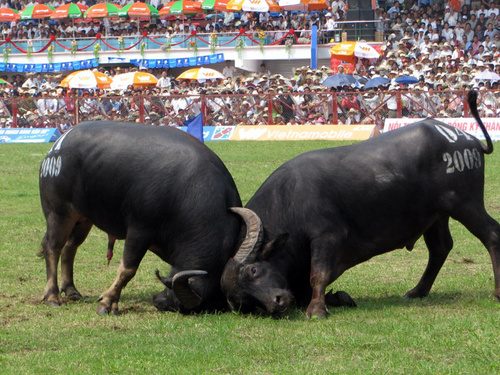 ​
The festival derives from the belief of Do Son’s locals that buffalo fighting is in favor of their guardian gods and hence a continuity of this activity brings them safe voyages, abundant crops as well as healthy and wealthy people — signs of prosperity and happiness. As a matter of fact, Do Son Buffalo Fighting Festival has been long conducted within the region since the 18th century.
The festival is annually and officially operated on the 9th day of the 8th month in Vietnamese Lunar Calendar; however, its preparation takes participants nearly a year to process. From choosing the right buffaloes to buy, raising and training them — all of which require hard work and ongoing effort. For example, selection of fighting buffaloes only must be in great meticulosity as they must meet a wide range of requirements: at least 4 or 5 years old, wide chest, bow-shape horns, toned thighs, and long tail. Also, these buffaloes are kept separately from normal ones, and so on.
Like other festivals in Vietnam, Buffalo Fighting Festival consists of two parts: Spiritual rites and entertaining activities. Since the first day of the 8th Lunar month, at the General Commune House of all villages in Do Son District, the elders carried out a sacrificial ceremony towards Diem Tuoc God with participation of all of the villages which have buffaloes joining in the occasion. After that, there is a ceremony worshipping Water Goddess, in which the holy water is annually changed and given to each village to worship in their own Village Hall. Also, buffalo owners lead their fighting buffaloes towards Village Halls to carry out the Tutelary God Worshipping rite. After this sacred ceremony, each fighting buffalo is officially called “Sir Buffalo”, representing the locals’ spiritual life, hope, and belief.
In the early morning of the 9th day in the 8th lunar month, local people hang out together at their Village Halls. From there, a mass procession drawing “Sir Buffalo” to the arena is run with boisterous music of traditional orchestra, colorful palanquin and festival flags.
The entertaining part of the festival is on the 9th day of the 8th lunar month in which a rich diversity of traditional activities enriching Vietnam’s national identity is carried out. First of all, 24 muscular young men line up into two rows, strongly and flexibly performing flag dance in the urgent sound of drums and cymbals. According to villages’ elders, the urgent and vibrant rhythm aims at creating a militant atmosphere in the arena, urging “Sir Buffalo” to fight more drastically. At about 8.00 am, after the opening sound of drums and gongs, the festival’s hosts called “Sir Buffaloes” to join the games and starts the battle. After that, two buffaloes are led into the arena from two opposite gates. As soon as they reach the Five Phoenix Flag and the signal of starting game ends, the two buffaloes immediately run into each other and start fighting. Each of these buffaloes use trained gimmickry to attack its enemy until one of them run out of the arena.
After many tensions and dramatic games, at the end of the day, the winning buffalo will be killed in a ceremony worshipping Water Goddess. According to local people, the village which owns the winning buffalo will have a new year full of good fortune and security. Especially, all fighting buffaloes are sacrificed towards Heaven and Earth in the hope of local people for a happy and wealthy life. Also, it is widely believed among villagers that eating the meat of festival participating buffaloes will bring them good lucks.
Overall, Buffalo Fighting Festival represents the unique spiritual life of Do Son’s vernacular people, contributing to create the unique lifestyle of this coastal area.
TIME: 9th day of 8th month
PURPOSE: worship Water Goddess, express the chivalry sp
ACTIVITIES: Buffaloes preparation
Spiritual rites: sacrificial ceremony towards Diem Tuoc God, Water Goddess worshipping ceremony, Tutelary God worshipping rite, buffalo sacrifice rite
Entertaining activities: buffalo fighting, traditional games and singings
​Get Our Newsletter Join us for updates, insider reports & special offers.