As Vietnamese people always show deep gratitude towards their origins and ancestors, every year, the Death anniversary of the Hung Kings - also known as Hung King Temple Festival - is celebrated on the tenth day of the third Lunar month. 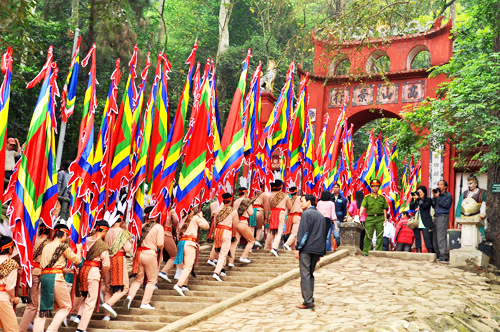 ​
Being one of the public holidays of Vietnam, this festival is for worshipping Hung Kings, those who make great contribution in building the country in its very first start. Death anniversary of the Hung Kings has the purpose of educating the young generation of Vietnam society about their traditional root. On this special day, Vietnamese people, not only at home but also abroad, turn their souls and hearts towards Nghia Linh Mountain, Viet Tri City, Phu Tho Province — the sacred land where Hung Kings established the country centuries ago.
Legends have it that Vietnamese people are the descendants of Lac Long Quan and Au Co. After getting married with Lac Long Quan, Au Co gave birth to one hundred children, and the eldest son among them established himself as the King of Van Lang and built up his Kingdom at Phong Chau, Phu Tho Province nowadays. From generations to generations, the reign of Hung Kings has become an important period in the history of Vietnam, setting up the country’s foundation, tradition, culture and also a set of national values: patriotism, sense of community, mutual fondness, and aversion towards foreign invasion. Being recognized as one national holiday of Vietnam, the organization of Hung Kinh Temple Festival is carefully and strictly conducted. In even years, the festival is held ‘nationally’ with the presence of Vietnam’s heads of state; on the other hand, in odd years, it is laid in the hand of Phu Tho province’s government. Since 2007, people have been allowed to be off from work on this special day.

Every year is the same - people from all corners of the country and even oversea gather at Hung King Temple, Phu Tho to participate in solemn ceremonies. The first one among them is a procession of great spectacularity. From the 9th day’s afternoon, the village in charge of operating the procession gathers at the foot of Nghia Linh Mountain, preparing the palanquin and oblations including foods, flowers, and incense sticks. In the early morning of the 10th day, together with beautiful young boys and girls in beautiful holiday clothes carrying colorful offerings, flags and flowers, delegates head towards the mountain to offer wreaths from leaders of the nation, representatives of Phu Tho province as well as other provinces and cities. Specially, in even years, this activity is, lead by honored soldiers from Vietnam’s People Army. After that is the incense offering ritual carried out at the Upper Temple of Hung King Temple. In the years when the festival is organized by Phu Tho province, the opening speech is read by the Chairman of the province; meanwhile, in the years when the festival is held nationally, it is operated by a representative from Ministry of Culture, Sports and Tourism or one of the country’s head of state. For example, in the year of 2012, National Assembly Chairman Nguyen Sinh Hung is the one who conducted this rite.
Beside the Upper Temple, flocks of people also offer incense sticks and flowers at other places nearby such as Gieng Temple or the foot of Nghia Linh Moutain. The whole process of palanquin procession ceremony and incense offering ceremony is directly reported so that every person living in Vietnam or in a foreign country can experience the spirit of this meaningful event. Participating in these ceremonies, people from all parts of the country, regardless of ages, pray their ancestors for blessed lives.
Apart from the part of ceremonies, Death anniversary of the Hung Kings also consist of several cheerful activities like performances of Cheo singing, Quan Ho singing, Xoan singing as well as games of chess playing, rice cooking and chicken kicking.
Overall, Death anniversary of the Hung Kings is a valuable opportunity for Vietnamese at home and abroad to strengthen the country’s long lasting tradition of gratitude, patriotism as well as enhance national solidarity.
TIME: 10th day of 3rd lunar month
PURPOSE: worship Hung Kings—the country’s founders
ACTIVITIES:
Ceremonies: processions, oblations, oration
Entertaining activities: traditional singings, chess playing, and so on
​Get Our Newsletter Join us for updates, insider reports & special offers.