Located on Han River, Danang is a beautiful and poetic destination in the central part of Vietnam. Since the year of 2008, the city's International Fireworks Competition is held annually on April 29th and 30th. 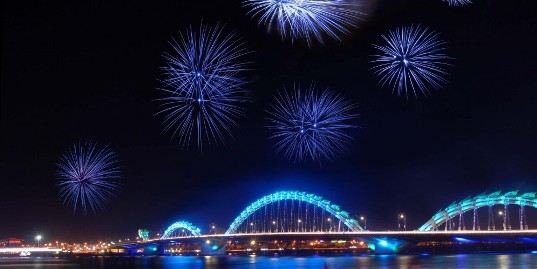 Being a playfield for firework creators, this annual competition takes aim at introducing Danang’s land and people towards Vietnamese individuals at home and abroad as well as foreign friends. Themes of Danang International Fireworks Competition (DIFC for short) are changed through years. For example, the theme for 2011 competition was “The Sparkling Han River”, and turned into “Colors of Danang” in the year of 2012. Each year, contests among Vietnam and different nations like China, Canada are organized. The fireworks played in Danang International Fireworks Competition (abbreviated as DIFC) are extremely beautiful and colorful that would take observers’ breathe away.
DIFC promises to bring audiences the best of firework performances, with various colors and styles. Tickets for this amazing event rank from 200,000 to 300,000 VND (about 10 to 15 US dollars). In addition, there are several entertaining activities such as music concerts, entertainment and cultural shows.
NOTE: After 2013, DIFC will become a biennale event.
TIME: every year, around March or April
PURPOSE: introduce Danang’s image to the world
ACTIVITIES: contests among different teams from different nations, concerts, cultural shows
​Get Our Newsletter Join us for updates, insider reports & special offers.