The purpose of Cow Racing Festival is to celebrate the last day of the year-according to Khmer calendar. It is celebrated together with Sene Dolta, a festival similar to Vu Lan - an occasion for people to show respects towards their family members or friends who departed from life, from the 29th day of the 8th month to the 2nd day of the 9th month in Lunar calendar. 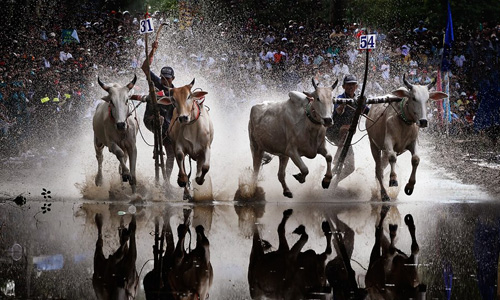 The festival takes place within the region of Bay Nui (seven mountains), An Giang province. The event of Cow Racing is so unique that there seems to be no other ones that could be muddier, more chaotic or more energetic. Before the competition, from several villages of An Giang province, best pairs of cows chosen for joining the activity go under special treatment for months — they are well fed and traditionally taught. On the racing day, pairs of cows are determined to compete with one another by drawing. They perform their skills on a rice field which must be really muddy and in a length of 120 meters.
When the race starts, with each pair of cows, the rider, holding a tow, will make them run as fast as possible by slashing. However, within a pair, the cows must maintain a same speed. The race is a circular track, including two laps. In the first round, pairs of cow are under control; meanwhile, in the second one, there is no holding back. Pairs which remain until the end of the event are those that manage to reach the finish line before their competitors. The one leading their cows to the first position will be awarded the greatest honor — being the bravest rider in the region.
From the very beginning until its end, the festival goes into rhapsodies with the sounds of clapping, cheering and encouraging. Enjoying the race, audiences only need to stand on a higher point in comparison with the mentioned muddy rice field.
TIME: 29th day of 8th lunar month to 2nd day of 9th lunar month
PURPOSE: show people’s respects to dead family members (in Khmer community)
ACTIVITIES: cow preparation and cow racing among people’s loud cheers and applauses
​Get Our Newsletter Join us for updates, insider reports & special offers.