Buffalo Sacrifice Festival is an annual festival taking place in the Central Highland (Tay Nguyen) of Vietnam. Being held from the twelfth lunar month of the previous year to the third month of the next year, Buffalo Sacrifice Festival is the most prominent cultural activity among ethnic minority community in their dear wishes for a prosperous harvest and happy life. 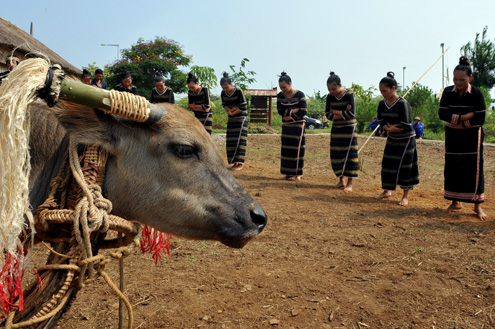 To prepare for the ceremony, young men will go into the forest and cut down four big trees. Then, they will carve special patterns and motifs which represents the spiritual culture, mysterious terrain and unique beliefs there. On the festive day, people set up these four pillars at four corners of an empty ground. As the sound of Gongs and drums emerges, a buffalo was led to the centre of the ground and tied to the Gingga Pillar in front of the Communal House. At about 4PM, young men in the village wearing colorful shirts named “Blan” start playing Gongs and drums. People at all ages gather at the Communal House garden and cheerfully talk to each other. The chair of the ceremony is an elder in the village called “Riu Yang”. Riu Yang stands next to the tied buffalo and starts praying deities for a prosperous harvest. After that, young men and women start dancing vibrantly. The faster the rhythm goes, the more energetic they dance. During the dancing, female participants will try to splash water to male ones. Men who are not flexible enough to avoid all of the water splashed at them are believed to hardly get married in the future. Hence, they should pull themselves together and move as fast as they can.
After effervescent dance movements is the buffalo sacrifice ceremony. The man who can kill the buffalo with a single stab only will receive great praises and honor. Meat of the dead buffalo will be shared to every household in the village; a part of the meat is remained for villagers to eat together at the Communal House. Buffalo’s horns are hung on the wall of the Communal House and its blood is used to wash village’s treasures.
After buffalo sacrifice ceremony is the part of entertaining activities. Throughout the night, people keep on dancing and drinking in the boisterous and harmonious combination of gongs, flutes, and drums sounds. During the festival, people enjoy eating traditional delicious foods such as buffalo meat, bamboo-tube rice as well as drinking stem wine together. All the sadness, jealousy and hatred have gone with the wind, and joy and happiness is multiplied. People cheerfully get back to their ordinary routines.
The festival has deep spiritual meaning, representing the lifestyle and custom of people living in the Central Highland part of Vietnam. Also, it has a vital role to play in forming and coloring the unique identity of this region. Being an important festival in Tay Nguyen community, the festival is widely held among ethnic minority groups of Bahnar (Ba Na), Rhade (Ê Đê), Sedang (Xê Đăng), Stieng (Xtiêng), and so on.  Also, Buffalo Sacrifice festival sharply depicts the strong bond between human beings and Mother Nature.
TIME: 12th-3rd lunar month
PURPOSE: wish for wealthy and happy lives
ACTIVITIES:
Ceremonies: praying, dancing, water splashing, and buffalo stabbing
Entertaining activities: dancing, eating, drinking
​Get Our Newsletter Join us for updates, insider reports & special offers.