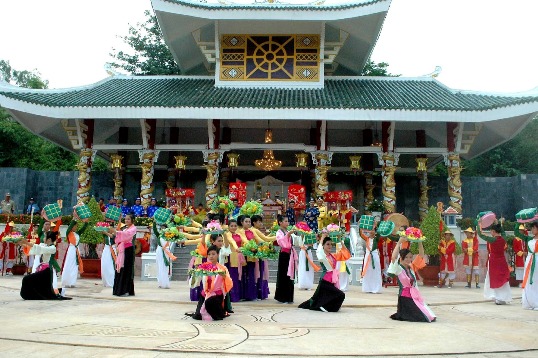 The temple was constructed in 1820 as according to folklore, in the early 1800s, local people there had found a female statue made of marble in the forest—they considered her as their ‘country lady’, Ba Chua Xu. They built the temple to worship the lady with the hope that she would bring them greater crops as well as happier and wealthier lives.
Ba Chua Xu Temple meaning ‘kingdom’ or ‘country’—it has foursquare roofs floored in blue tiles. The festival consists of five ceremonies: ‘bathing’ (actually washing) Ba Chua’s statue in which it is cleaned with scented water and changed costumes into new ones; inviting the spirit of Thoai Ngoc Hau—a general in Nguyen Dynasty—to the temple as a commemoration of his merit in reclaiming the land; sacrificing offerings (called Tuc Yet); establishing altar; and giving oblations one more time (called Chanh Te).
Offerings are placed on the table in front of Ba Chua’s statue, including a white pig, pig’s blood and hair (called ‘mao huyet’—hair and blood), sticky rice, fruits, areca and betel, rice and salt, and incense sticks.

Following is the timeline for the event: