The Mekong Delta - My Tho

Southwest of Ho Chi Minh City, buses emerge from the city’s unkempt urban sprawl and into the pastoral surrounds of the Mekong Delta’s upper plains. The delta is too modest to flaunt its full beauty so soon, but glimpses of rice fields hint at things to come, their burnished golds and brilliant greens interspersed with the occasional white ancestral grave. Seventy kilometres out of Ho Chi Minh City lies MY THO, an amiable market town that nestles on the north bank of the Mekong River’s northernmost strand, the Tien Giang, or Upper River.

My Tho’s proximity to Ho Chi Minh City means that it receives the lion’s share of day-trippers to the delta, resulting in a scrum of pushy vendors crowding round each tour bus that arrives. Nevertheless, the town comes as a great relief after the onslaught of Ho Chi Minh City, its uncrowded boulevards belying a population of around 220,000, and you can easily escape the melee by hopping onto a boat or wandering into the backstreets. 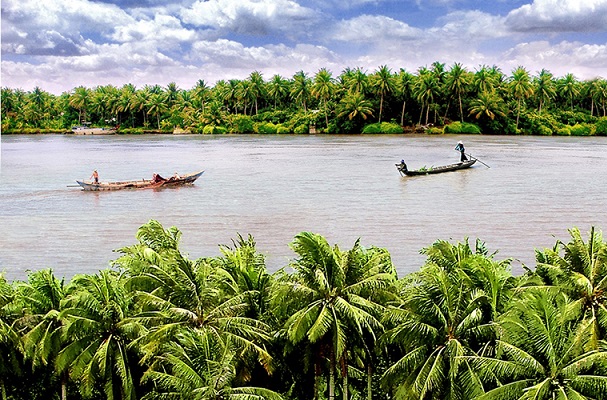 This daily influx of visitors seems appropriate, given the town’s history. Chinese immigrants fleeing Formosa (modern-day Taiwan) after the collapse of the Ming dynasty established the town in the late seventeenth century, along with a Vietnamese population keen to make inroads into this traditionally Khmer-dominated region. Two centuries later the French, wooed by the district’s abundant rice and fruit crops, rated it highly enough to post a garrison here and to lay a (now-defunct) rail line to Saigon; while the American War saw a consistent military presence in town. Today My Tho’s commercial importance is as pronounced as ever, something a walk through the busy town market amply illustrates.

The river’s traffic – which ranges from elegant sampans to vast, lumbering cargo boats, unpainted and crude – is best viewed from Lac Hong Park at the eastern end of 30 Thang 4 street, where you’re sure to catch sight of the most characteristic feature of the boats in the delta – feline eyes painted on their prows. In the evenings, especially at weekends, this corner of town is packed as families stroll up and down, interspersed with sellers of balloons, popcorn and even tropical fish. At night, young lovers huddle on their motorbikes, while men play shuttlecock football on the street under the intent gaze of a statue of nineteenth-century anti-French hero Nguyen Huu Huan, who studied in My Tho.