Temples and Tombs in Vietnam

The Vietnamese have not been prolific builders like their Khmer neighbours, or the Chams, whose graceful towers and temples adorn many southern parts of the country, but even so Vietnam boasts an eclectic collection of monuments. All of the big cities have striking temples and, outside Hue, there is an outstanding number of imperial tombs and monuments. Elsewhere, plenty of pagodas and temples founded hundreds of years ago are still functioning and there are memorials of another kind: war memorials commemorating those who fell in battles against the Chinese, French and Americans can be found throughout many parts of the country. 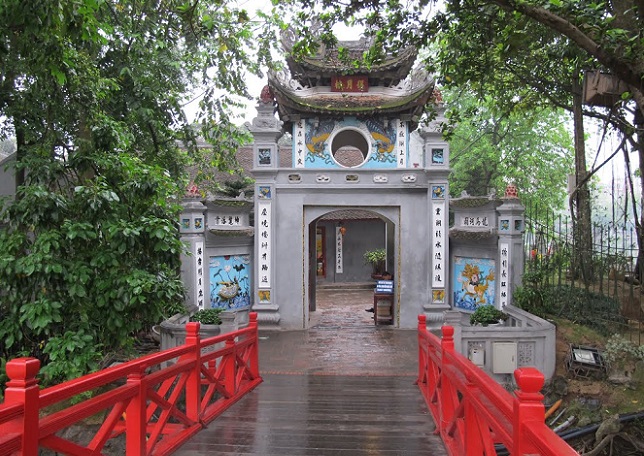 Meaning 'Temple of the Jade Mountain', Hanoi's most visited temple sits on a small island in the northern part of Hoan Kiem Lake, connected to the lakeshore by an elegant scarlet bridge, constructed in classical Vietnamese style. The temple is dedicated to General Tran Hung Dao (who defeated the Mongols in the 13th century), La To (patron saint of physicians) and the scholar Van Xuong. 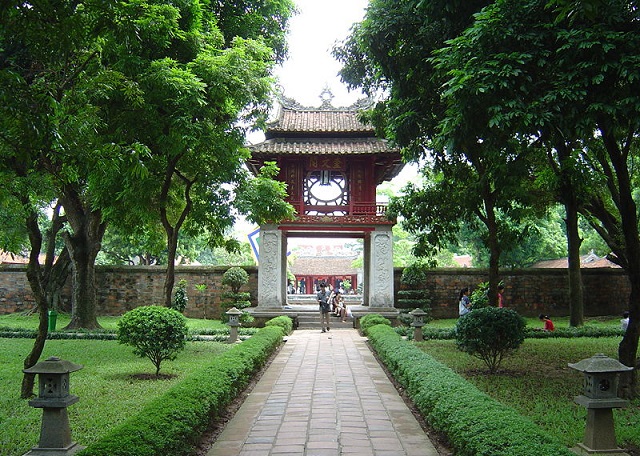 Founded in 1070 by Emperor Ly Thanh Tong, the Temple of Literature is dedicated to Confucius (Khong Tu). Inside you'll find a pond known as the 'Well of Heavenly Clarity', a low-slung pagoda and statues of Confucius and his disciples. A rare example of well-preserved traditional Vietnamese architecture, the complex honours Vietnam’s finest scholars and men of literary accomplishment. It is the site of Vietnam’s first university, established here in 1076, when entrance was only granted to those of noble birth.

After 1442 a more egalitarian approach was adopted and gifted students from all over the nation headed to Hanoi to study the principles of Confucianism, literature and poetry. In 1484 Emperor Ly Thanh Tong ordered that stelae be erected to record the names, places of birth and achievements of exceptional scholars: 82 of 116 stelae remain standing. Paths lead from the imposing tiered gateway on Quoc Tu Giam through formal gardens to the Khue Van pavilion, constructed in 1802. 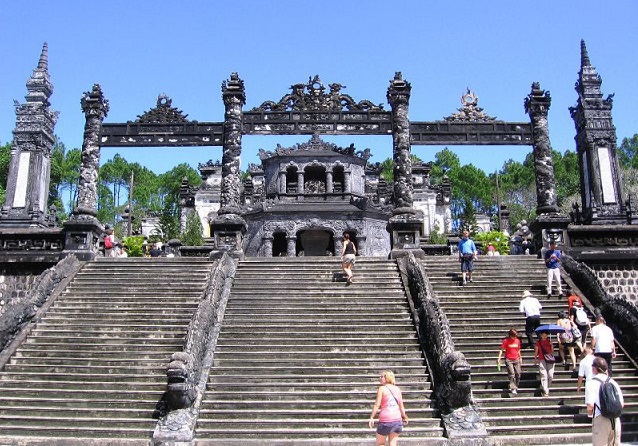 The tombs of the rulers of the Nguyen dynasty (1802–1945) are extravagant mausoleums, spread out along the banks of the Perfume River between 2km and 16km south of Hue. Almost all were planned by the emperors during their lifetimes, and some were even used as residences while they were still alive.

Most of the mausoleums consist of five essential elements. The first is a stele pavilion dedicated to the accomplishments, exploits and virtues of the emperor. Next is a temple for the worship of the emperor and empress. The third is an enclosed sepulchre, and fourth an honour courtyard with stone elephants, horses, and civil and military mandarins. Finally, there’s a lotus pond surrounded by frangipani and pine trees.

While many of the tombs can be reached by boat, you’ll have more time to enjoy them by renting your own bicycle or motorbike. Alternatively hire a xe om (motorbike taxi) or car and driver for the day. 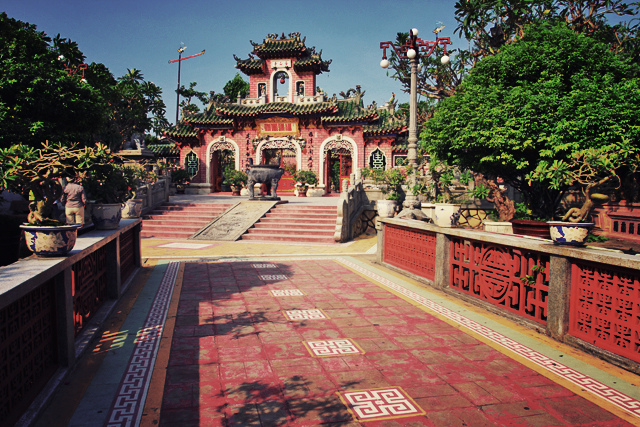 Originally a traditional assembly hall, this structure was later transformed into a temple for the worship of Thien Hau, a deity from Fujian province. The green-tiled triple gateway dates from 1975. The mural on the right-hand wall depicts Thien Hau, her way lit by lantern light as she crosses a stormy sea to rescue a foundering ship. Opposite is a mural of the heads of the six Fujian families who fled from China to Hoi An in the 17th century.

The penultimate chamber contains a statue of Thien Hau. To either side of the entrance stand red-skinned Thuan Phong Nhi and green-skinned Thien Ly Nhan, deities who alert Thien Hau when sailors are in distress.

In the last chamber, the central altar contains seated figures of the heads of the six Fujian families. The smaller figures below them represent their successors as clan leaders. Behind the altar on the right are three fairies and smaller figures representing the 12 ba mu (midwives), each of whom teaches newborns a different skill necessary for the first year of life: smiling, sucking and so forth. Childless couples often come here to pray for offspring and leave fresh fruit as offerings. 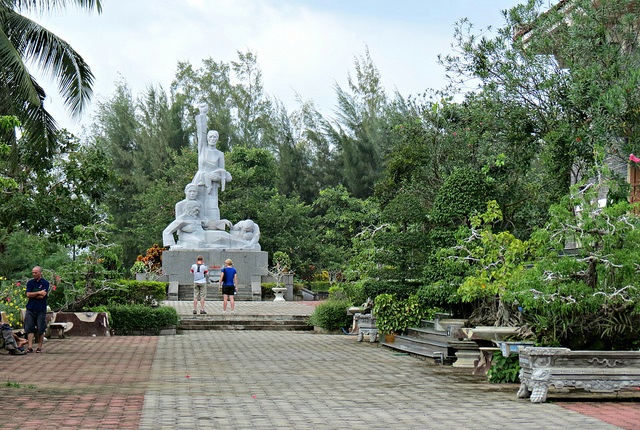 This tranquil rural spot was the setting for one of the most horrific crimes of the American War, a massacre committed by US troops in that killed 504 villagers, many of them elderly and children on 16 March 1968. The deeply poignant Son My Memorial was constructed as a monument to their memory.

Location: Son My (My Lai), Vietnam Home to the Cao Dai Great Temple (Thanh That Cao Dai), the Cao Dai Holy See, founded in 1926, is 4km east of Tay Ninh, in the village of Long Hoa. As well as the Great Temple, the complex houses administrative offices, residences for officials and adepts, and a hospital of traditional Vietnamese herbal medicine that attracts people from all over the south for its treatments

Prayers are conducted four times daily in the Great Temple (suspended during Tet). It’s worth visiting during prayer sessions (the one at noon is most popular with tour groups from HCMC) but don’t disturb the worshippers. Only a few hundred adherents, dressed in splendid garments, participate in weekday prayers but during festivals several thousand may attend.

The Cao Dai clergy have no objection to visitors photographing temple objects, but do not photograph people without their permission, which is seldom granted. However, it is possible to photograph the prayer sessions from the upstairs balcony, an apparent concession to the troops of tourists who come here daily.

It’s important that guests wear modest and respectful attire inside the temple, which means no shorts or sleeveless T-shirts.

Set above the front portico of the Great Temple is the divine eye. Lay women enter the Great Temple through a door at the base of the tower on the left. Once inside they walk around the outside of the colonnaded hall in a clockwise direction. Men enter on the right and walk around the hall in an anticlockwise direction. Hats must be removed upon entering the building. The area in the centre of the sanctuary is reserved for Cao Dai priests.

A mural in the front entry hall depicts the three signatories of the ‘Third Alliance between God and Man’: the Chinese statesman and revolutionary leader Dr Sun Yat-sen (Sun Zhongshan; 1866–1925) holds an ink stone, while the Vietnamese poet Nguyen Binh Khiem (1492–1587) and French poet and author Victor Hugo (1802–85) write ‘God and humanity’ and ‘Love and justice’ in Chinese and French (Nguyen Binh Khiem writes with a brush, Victor Hugo uses a quill pen). Nearby signs in English, French and German each give a slightly different version of the fundamentals of Cao Daism.

The main hall is divided into nine sections by shallow steps, representing the nine steps to heaven, with each level marked by a pair of columns. Worshippers attain each new level depending on their years as Cao Dai adherents. At the far end of the sanctuary, eight plaster columns entwined with multicoloured dragons support a dome representing the heavens. Under the dome is a giant star-speckled blue globe with the ‘divine eye’ on it.

The largest of the seven chairs in front of the globe is reserved for the Cao Dai pope, a position that has remained vacant since 1933. The next three chairs are for the three men responsible for the religion’s law books. The remaining chairs are for the leaders of the three branches of Cao Daism, represented by the colours yellow, blue and red.

On both sides of the area between the columns are two pulpits similar in design to the minbar in mosques. During festivals the pulpits are used by officials to address the assembled worshippers. The upstairs balconies are used if the crowd overflows.

Up near the altar are barely discernible portraits of six figures important to Cao Daism: Sakyamuni (Siddhartha Gautama, the founder of Buddhism), Ly Thai Bach (Li Taibai, a fairy from Chinese mythology), Khuong Tu Nha (Jiang Taigong, a Chinese saint), Laotse (the founder of Taoism), Quan Cong (Guangong, Chinese God of War) and Quan Am (Guanyin, the Goddess of Mercy). 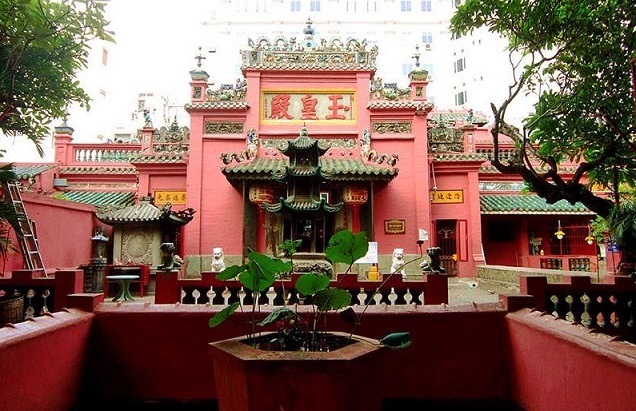 Built in 1909 in honour of the supreme Taoist god (the Jade Emperor or King of Heaven, Ngoc Hoang), this is one of the most spectacularly atmospheric temples in Ho Chi Minh City, stuffed with statues of phantasmal divinities and grotesque heroes. The pungent smoke of incense (huong) fills the air, obscuring the exquisite woodcarvings. Its roof encrusted with elaborate tile work, the temple's statues, depicting characters from both Buddhist and Taoist lore, are made from reinforced papier mâché.

Worshippers mass before the ineffable Jade Emperor, who presides – draped in luxurious robes and shrouded in a dense fug of incense smoke – over the main sanctuary. He is flanked by his guardians, the Four Big Diamonds (Tu Dai Kim Cuong), so named because they are said to be as hard as diamonds.

Out the door on the left-hand side of the Jade Emperor’s chamber is another room. The semi-enclosed area to the right (as you enter) is presided over by Thanh Hoang, the Chief of Hell; to the left is his red horse. Other figures here represent the gods who dispense punishments for evil acts and rewards for good deeds. The room also contains the famous Hall of the Ten Hells, carved wooden panels illustrating the varied torments awaiting evil people in each of the Ten Regions of Hell. Women queue up at the seated effigy of the City God, who wears a hat inscribed with Chinese characters that announce 'At one glance, money is given'. In a mesmerising ritual, worshippers first put money into a box, then rub a piece of red paper against his hand before circling it around a candle flame.

On the other side of the wall is a fascinating little room in which the ceramic figures of 12 women, overrun with children and wearing colourful clothes, sit in two rows of six. Each of the women exemplifies a human characteristic, either good or bad (as in the case of the woman drinking alcohol from a jug). Each figure represents a year in the 12-year Chinese astrological calendar. Presiding over the room is Kim Hoa Thanh Mau, the Chief of All Women. Upstairs is a hall to Quan Am, the Goddess of Mercy, opposite a portrait of Dat Ma, the bearded Indian founder of Zen Buddhism.

The multifaith nature of the temple is echoed in the shrine's alternative name Phuoc Hai Tu (福海寺; Sea of Blessing Temple), whose message is clearly Buddhist. Similarly, the Chinese characters (佛光普照; Phat Quang Pho Chieu) in the main temple hall mean 'The light of Buddha shines on all'.

Outside, a small pond seethes with turtles, some of which have shells inscribed with auspicious inscriptions.