Ninh Binh - Dedicated To The Divine

Discover Vietnam’s cultural essence on a pilgrimage to Trang An during the festival season. Considered a sacred land in Vietnam, Trang An is known for its traditional festivals, which allow people to connect with the divine. During these festivals, people make sacrifices to deities and keep memories of ancestors and national heroes alives. 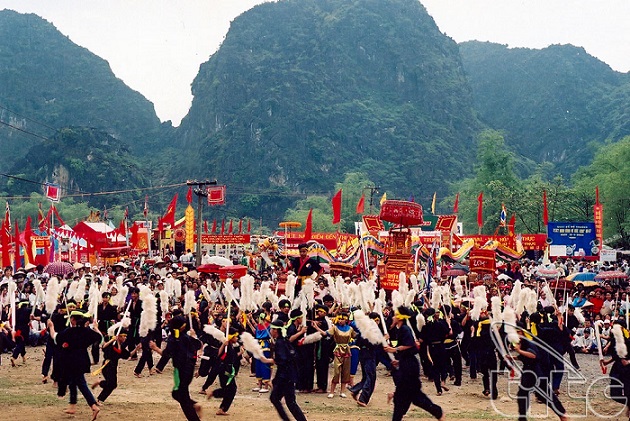 Saint Quy Minh Emperor also known as Saint Cao Son, is a folk deity worshiped in Tran Temple and one of the four sacred guardians of the former citadel of Hoa Lu. Legend has it that the Saint Quy Minh Emperor Temple was built by Emperor Dinh Tien Hoang in the 10th century in the hopes of ensuring security on the nation’s borders. Following his victories over Mongolian invaders, Emperor Tran Thai Tong chose the temple as a place to practice Buddhism, and rebuilt the first wooden temple into a grander marble building with unique decorative patterns. Known locally as Tran Temple, this tranquil site is only accessible by boat. During the festival on Lunar March 18, thousands of boats carry locals and tourists down the Sao Khe River to perform divine sacrifices, join a water procession and release fish to pray for national people peace, bumper crops and favourable weather.

The Bai Dinh Pagoda Complex comprises the old Bai Dinh Pagoda and the grand Bai Dinh complex constructed in Sinh Duoc Village, Gia Sinh Commue, Gia Vien District in 2003. This spring festival lasts from Lunar January 6 to the end of Lunar March. Key events include a dedication of incense to Buddha in memory of the deeds of Saint Nguyen Minh Khong and sacrifice to Saint Cao Son, Saint Nguyen and the Holy Mother of the Moutains. There are also folk games and performances of chèo, xẩm, singing and trù singing.