World Heritage Phong Nha-Ke Bang National Park, with its karst mountains, underground rivers, historic sites, extensive caves and unspoilt jungle, is packed with opportunities to hike, bike, paddle or simply relax in one of Vietnam's most spectacular and interesting regions.

The national park is famously home to Hang Son Doong, discovered in the early 1990s and confirmed as the biggest cave on the planet only in 2009. In recent years the cave has become one of the hottest tickets in travel for in-the-know adventurers. Negotiating its 5km-long cavern is superbly exciting, but guided tours are limited and beyond the budget of many. Luckily there are many other activities – both below and above ground – to occupy travellers in the Phong Nha-Ke Bang area. Boat on the river at Phong Nha-Ke Bang National Park

Spend a day exploring the Bong Lai Valley. Meandering tracks and back roads made for mountain bikes weave through local villages and along sleepy rivers, passing by an ever-expanding array of laidback attractions. Lunch on grilled chicken with peanut sauce at the Pub with Cold Beer, or spend a relaxing afternoon in a rustic riverside shelter at the Wild Boar Eco-Farm.

Meeting the challenge of Hang Toi

Kick off a visit to Hang Toi (Dark Cave) with a soaring zipline flight above a forest-shaded river, before a brief but bracing swim into the mouth of the cave. Natural light soon fades as visitors are led further into the cavern, through narrow passageways filled with a mini-ocean of gluggy mud, before soaking and swimming in the underground waters of Thuy Tien lake. Upon exiting the cave, it's a short and very scenic kayak paddle back to the Dark Cave's main jetty. 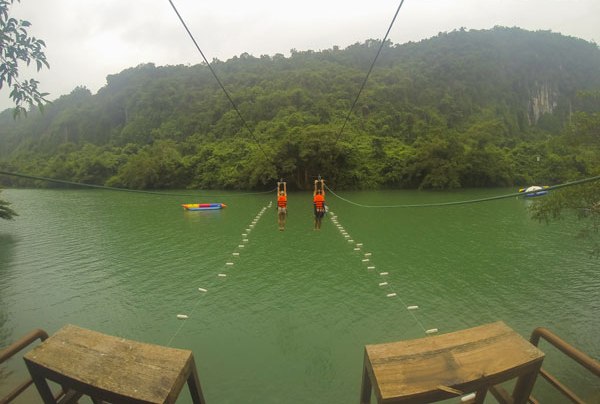 Delving into the area's war history

Arrange a tour to explore the region's wartime history, either in a restored US Army jeep or in the sidecar of Soviet-era Ural motorbike. Tours negotiate winding roads past roaring rapids and sheer cliff faces around rugged Highway 20, and sections of the famed Ho Chi Minh Trail, which was vital to the Vietnamese war effort. You can also visit poignant Hang Tam Co (Eight Lady Cave), now a memorial to eight Vietnamese pioneer soldiers who perished in 1972 after a US bombing raid sealed the entrance to the cave.

Relaxing by the river

After active days underground or trudging through the jungle, a more relaxed pursuit is to spend a few hours at the Nuoc Mooc Ecotrail. A series of linked walkways and bamboo bridges winds through a forested limestone labyrinth of pristine pools and turquoise springs. Kayaking is available on a small lake, and there’s a rustic rope bridge – a bit of a thrill after a lazy lunch in one of Nuoc Mooc's open-air gazebos. Two days/ one night tours of the wider Tu Lan Cave system commence with a full-day hike through rustic countryside, before a campsite with hammocks is set up adjacent to the beautiful cave Hang Ken. Day two includes exploration of Tu Lan, and the challenging combination of trekking and swimming through the Kim and Hung Ton caves. For the even more adventurous, there is a longer and more challenging three days/two nights tour option.

Located close to renowned Hang Son Doong, Hang En is currently regarded as the third-largest cave on the planet. Two days/one night tours give travellers the opportunity to camp at a spectacular riverside location within the cave, and visit the remote ethnic minority village of Ban Doong. Fossils up to 300 million years old have been found in the cave, but present-day wildlife includes thousands of swifts, which dart amid the diffuse shafts of sunlight projecting into Hang En's giant cavern. Being one of the first to explore Hang Va

Discovered in 2012, and only opened to visitors in 2015, Hang Va is the newest underground adventure in the Phong Nha region. Leading caving outfit Oxalis runs two days/one night adventures that include travelling along an underground river in the nearby Hang Nuoc Nut cave. After overnighting at a jungle camp near Hang Va's entrance, visitors explore the cave's spectacular partially submerged stalagmite field. Bring a sense of adventure – ropes and harnesses are used extensively during this experience. Access to the park is quite tightly controlled (the park is still riddled with unexploded ordnance). Officially you are not allowed to hike here without a licensed tour operator. You can travel independently (by motorbike or car) on the Ho Chi Minh Highway or Highway 20, both of which cut through the park.