Almost entirely flattened in the American War’s bombing raids, DONG HOI has risen from its ashes to become a prosperous, orderly provincial capital of over sixty thousand people. Tourists who pass by here usually use the town as a base for Phong Nha Cave, a hugely attractive system of caverns 30km away, and recognized by UNESCO as a World Heritage Site. As such, the town itself gets very few visitors and, while there is precious little to see here, the relative lack of tourists makes it a nice step off the beaten track. The Nhat Le River oozes through town just before hitting the sea, with the bulk of Dong Hoi clustered around its west bank. Here you’ll find remnants of a Nguyen dynasty citadel – the only notable part is its pretty south gate, which has been restored and now functions as the city’s focal point; it’s actually located away from the main body of the complex. There’s a lively riverside market east of the gate and an area of covered stalls where in summer vendors sell ice-cold glasses of sweet-bean chè. Just to the north of the citadel are more ruins, this time of a church destroyed during the American War; only the bell tower is now standing, with a couple of small trees maintaining a lonely vigil on top. 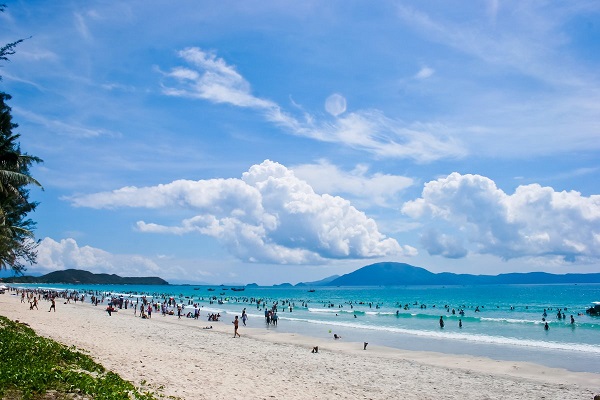 Crossing the Nhat Le, you’ll find yourself on a small spit of land, named My Canh. This is also the name of the small beach rifling down the eastern edge of the isthmus. As with sandy stretches up and down the land, it’s being developed as a resort area.