The largest city in Central Vietnam, DA NANG is primarily used by travellers as a jumping-off point for Hoi An, a city that has no airport or train station of its own. However, stick around a while and you’ll find an unexpectedly amiable place, whose burgeoning middle class are seeing their cosmopolitan desires sated with a slew of trendy bars and cafés. The old French presence is also apparent in the leafy boulevards and colonial edifices along the riverfront promenade. The elongated oval of Da Nang occupies a small headland protruding into the southern curve of Da Nang Bay. The city faces east, fronting onto Bach Dang and the Han River, across which the narrow Son Tra Peninsula shelters it from the South China Sea. The city itself harbours few specific sights of its own, beyond the wonderful Cham Museum with its unparallelled collection of sculpture from the period. However, there are a number of interesting sights in the area – just across the Son Tra Peninsula is My Khe Beach, an increasingly developed stretch of sand from which you can see Monkey Mountain to the north and the Marble Mountains to the south.

During the sixteenth and seventeenth centuries, trading vessels waiting to unload at Fai Fo (Hoi An) often sheltered in nearby Da Nang Bay, until Hoi An’s harbour began silting up and Da Nang developed into a major port in its own right. After 1802, when Hué became capital of Vietnam, Da Nang naturally served as the principal point of arrival for foreign delegations to the royal court. However, the real spur to the city’s growth came in the American War when the neighbouring air base spawned the greatest concentration of US military personnel in South Vietnam. 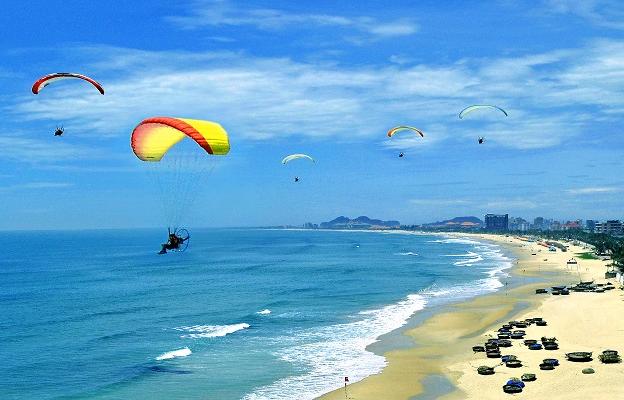 The seaward side of the Son Tra Peninsula provides Da Nang with its nearest unpolluted beach – My Khe, though its rival to the south, Non Nuoc Beach, also claims the same sobriquet. My Khe is a long, if not exactly glorious, stretch of sand less than 3km southeast of central Da Nang. This was where US servicemen were helicoptered in for R&R during the American War, though these days it’s far more popular with seafood-craving locals. A xe om ride here should cost 30,000đ (slightly more at night) for the ride from Da Nang.