The first thing you come to after a couple of kilometers off the highway is an archer’s statue standing in a small pond; continue straight on here (west) to find the principal temple. The Co Loa Temple Complex forms part of the Citadel of the same name. The principal temple, Den An Duong Vuong, faces a refurbished lake, with a graceful stele-house to one side. Inside the rebuilt temple, a sixteenth-century black-bronze statue of the king resides on the main altar, resplendent in his double crown, while a subsidiary altar is dedicated to Kim Quy, the Golden Turtle. 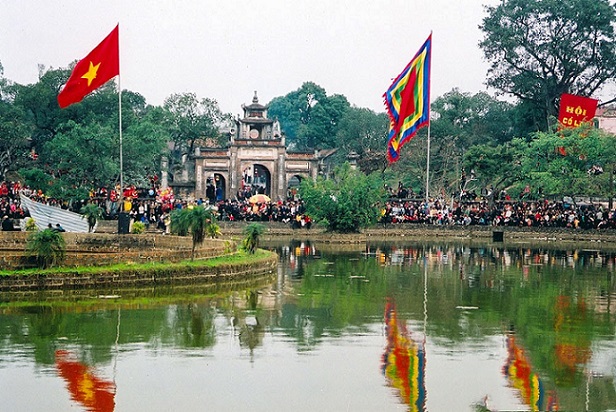 More interesting, however, is the second group of buildings, 100m north of the archer, where a large, walled courtyard contains a beautifully simple open-sided hall, furnished with huge, ironwood pillars, and containing some of the archeological finds. Next door is the princess’s small temple, Den My Chau. Sadly, it’s all new concrete, but inside she is still honoured in the surprising form of a dumpy, armchair-shaped stone clothed in embroidered finery and covered in jewels but lacking a head. 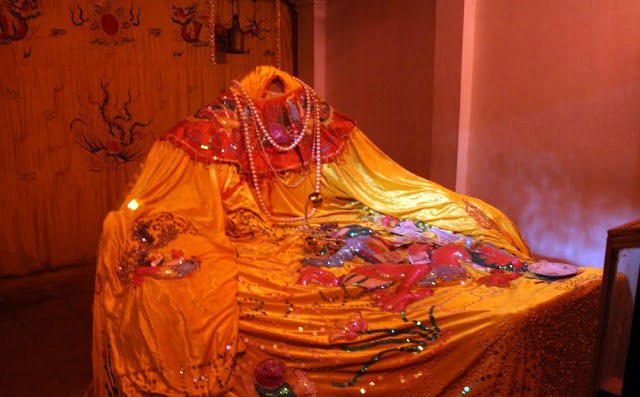 My Chau Princess statue inside My Chau temple