Annually, within one week of a particular month in the year, at Halong Bay - northern part of Quang Ninh province, Halong Tourism Week is organized. The event is a valuable chance for foreigner customers to grasp the unique beauty of Halong, and its spotlight is Halong Carnaval. 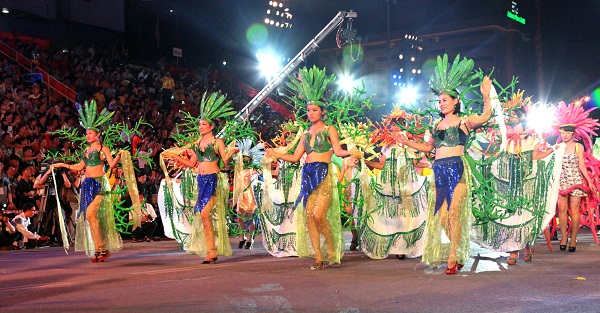 Since its first celebration in 2011, the Tourism Week at Halong Bay has clearly depicted its attractiveness regardless of a young age. Its themes and slogans keep refreshing through times. In the year of 2011, the Tourism Week was desirous of introducing Quang Ninh’s image in the eyes of foreign visitors as well as promoting Halong Bay to be chosen as one of the new seven natural wonders of the world, and its slogan was “Halong Quang Ninh – a tropical paradise”. As the project really kicked off, in 2012, Halong was become a new world’s natural wonder. As a result, the Tourism Week’s slogan turned into “Quang Ninh – convergence and diffusion”, with the purpose of prompting Quang Ninh’s cultural identities and tourism potentials.
Overall, Halong Tourism Week is a combination of modern and traditional styles. Also, there are a wide variety of cultural, tourism, and sporting activities, consisting of art performances and food festivals.
TIME: annually around April and May
PURPOSE: promote Halong’s tourism potential
ACTIVITIES: Halong Carnaval, art performances, food festivals, etc
​Get Our Newsletter Join us for updates, insider reports & special offers.