To those who live in Tay Nguyen, Vietnam, elephant is their precious animal. In local people's daily life, this wild animal has become a close friend with humans as they help people in working, transporting, and traveling. 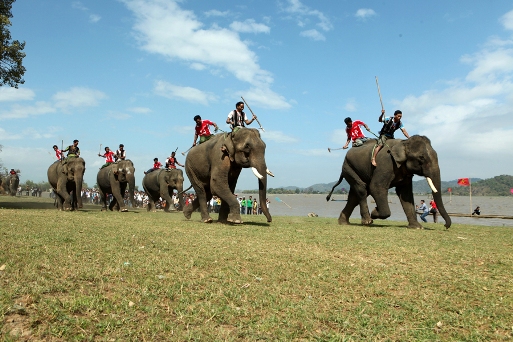 ​
Elephants are most known for its loyalty as during the time under the government of Chinese dynasties, they were continuously fighting for the country by fronting battles with generals and armies. They take a certain role in Vietnam’s folklore, and hence become familiar to lots of people. To express the bond between human beings and this friendly creature, Elephant Racing Festival, one of the biggest festivals in Tay Nguyen, is held annually in the third lunar month.
As preparation for the festival, villagers feed their elephants with a wide range of food apart from grass, including corns, sugar canes, sweet potatoes, papayas, and bananas. Also, in order to preserve their strength, the elephants take a rest without hard work.
Attending the event, flocks of festival-goers from near and far are in their most beautiful and colorful holiday clothes. On this day, elephants from several villages gather at Don Village (Ban Don). Each time, ten elephants will run at the same time for about one or two kilometers; hence, the track’s ground should be even and broad enough. The competition is guided by the sound of tu va, a kind of horn. The first elephant which reaches the appointed destination will receive a laurel wreath as a sign of victory, and it will enjoy the achievement excitedly with sugar canes and bananas from surrounding people.
After finishing the race at Don Village, the elephants move to Serepok River for another competition—swimming. They also participate in games like football and tug of war. At the end of the festive day, all festival goers mass at Ban Don’s community house for feasting, drinking stem wine, and dancing in a jubilant atmosphere with the boisterous sound of gongs and drums.
TIME: 3rd lunar month
PURPOSE: express the close bond between humans and elephants
ACTIVITIES: elephants participating in race, swimming competition, and other games
​Get Our Newsletter Join us for updates, insider reports & special offers.